Richard Trigg Leads after Day 1A of UKIPT London

Richard “The Claimeer” Trigg heads the leaderboard at the end of Day 1A of the PokerStars UKIPT London – one of six online qualifiers in the top seven places. 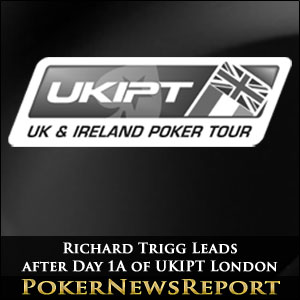 Richard “The Claimeer” Trigg heads the leaderboard at the end of Day 1A of the PokerStars UKIPT London – one of six online qualifiers in the top seven places.

The first of the UKIPT/EPT London tournaments got underway at the yesterday, with many well-known players from the online and the live poker scenes taking their seats in the spectacular Grand Connaught Rooms in Covent Garden. PokerStars – sponsors of the series – were represented by triple crown winner Jake Cody, Vicky Coren, Mickey Petersen and Henrique Pinho, while last weekend´s UKIPT Series 3 winner Dinh Tuan Nguyen made an appearance as did recent EPT Barcelona winner Tom Middleton.

In all, 246 players either qualified online or ponied up the £1,100 buy-in to battle their way through ten levels of play; at the end of which only seventy players survived, headed by Richard Trigg – who can claim to be both a successful online poker player with lifetime winnings in excess of £3 million, and a successful live poker player after taking down an event at the Binions Classic in June to add to his second place in Dusk till Dawn´s Monte Carlo in April.

Trigg Gets There to Lead

The flop of Q♥ J♥ K♦ gave Chris O´Donnell a straight, but when Richard Trigg opened up the post-flop betting for 2,000 chips, O´Donnell just called. Both players checked through the 4♠ on the Turn but, after the 6♥ was dealt on the River, O´Donnell led for 11,800 chips. Richard Trigg (who had rivered a flush) responded by putting O´Donnell all-in for his last 35,000 chips and O´Donnell made the call – and then made his way to the exit.

Close of Day 1A Chip Counts

While Richard Trigg and the other sixty-nine players who survived Day 1A enjoy a day off (or the cash games at the Hippodrome or the UKIPT side events), another bumper ground is expected to compete in Day1B of the UKIPT London. PokerStars representatives Daniel Negreanu and Liv Boeree are among the top players who have travelled to London for the UKIPT/EPT Series of tournaments and hopefully both have read the read the warning from PokerStars to get both a PS Live Card and a Hippodrome Friends Card in order to take their seats at the tables.