Dinh Tuan Nguyen won the third of the UKIPT Series events at the PokerStars LIVE poker room in London´s Hippodrome Casino for £15,384 after a five-way chop. 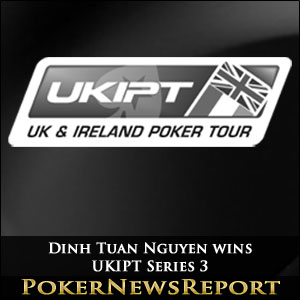 Dinh Tuan Nguyen won the third of the UKIPT Series events at the PokerStars LIVE poker room in London´s Hippodrome Casino for £15,384 after a five-way chop.

The third of the PokerStars UKIPT Series events took place this weekend at the Hippodrome Casino on London, with 464 players ponying up the £275.00 buy-in (or qualifying online) to generate a prize pool of £112,520.

After two Day 1s, 137 players took their seats on Sunday to play to the conclusion of the tournament – with the leaderboard headed by two PokerStars qualifiers, Haresh Thaker (244,100 chips) and Daniel Galla (238,100 chips).

Despite the fact that only 63 players were due to cash, the bubble was burst within six 30-minute levels on Day 2 when Daniel Whittaker failed to get his A♥ 10♥ passed the A♠ J♣ of Keith Ellis. Thereafter, assured of a £480.00 min-cash, the habitual torrent of eliminations followed and the final table of eight was set just after 8.00pm.

Nguyen off to a Flyer as Grace Goes and Biundo Bombs

Dinh Tuan Nguyen could not have asked for a better beginning to the final table. A double-up against Salman Safdar (4♥ 4♦ > J♥ 10♥) was followed up with another double-up against Lorenzo Biundo (Q♠ J♠ > A♣ 9♣) after Biundo had knocked out Paul Grace in eighth (A♥ J♠ > J♦ J♠).

Biundo himself was to depart in seventh when chip leader Jesus Espinosa Fernandez caught trip Nines to bust the Italian K♦ 9♦ > 10♦ 8♦ but, after Frank Bastow had got full value from his pocket Aces against Fernandez, Nguyen was still at the foot of the chip counts as six players remained.

Nguyen Continues to Fly as Safdar Sinks and Bastow

The successful double-ups continued for Dinh Tuan Nguyen, as he crippled Salman Safdar Q♣ Q♦ > A♠ 10♠ to move up into second place with just over 2 million chips and, after Safdat had been eliminated by Daniel Bonfield (A♥ 9♥ > A♦ 6♣), the five remaining players agreed an ICM five-way chop of the prize money based on their chip stacks, with £3,265 left over for the winner plus a seats in the UKIPT Champion of Champions tournament.

Frank Bastow had eventful trip to the cashier´s desk. In the first of three incredible hands, he hit trip Queens on the flop of Q♣ Q♥ K♦, but lost the pot against Michail Voulagkas who had pocket Kings for a Full House. In the next hand, Bastow hit trip Queens again and was this time able to treble-up against Voulagkas and Daniel Bonfield, but Michail Voulagkas eventually got the better of his adversary when flopping a set of Tens to best Bastow´s A♠ J♠ and missed straight draw.

This is Where You Need to Keep Up

As the blinds increased to 60,000/120,000 (ante 20,000) a double-up by Voulagkas against Fernandez (pocket Fives > A♦ 9♣) meant that there was less than five big blinds between the remaining four players. That quickly changed as Voulagkas made a great river call against Fernandez (J♣ 2♠ paired Jack > A♥ 5♦ Ace high) to leap into the chip lead before Dinh Tuan Nguyen took over at the top – doubling-up against Voulagkas A♦ 7♠ > K♦ Q♣.

Voulagkas doubled straight back with a set of Queens over Nguyen´s paired Ace in the next hand, but Dinh Tuan Nguyen re-established his commanding chip advantage by eliminating Jesus Espinosa Fernandez in fourth pocket Deuces > A♥ 9♣. Daniel Bonfield gave chase behind the leader by doubling-up against Nguyen (A♥ J♣ > A♠ 8♣) and Voulagkas (A♥ K♣ > A♣ 8♠) before eliminating the Greek player 7♥ 6♠ (for flopped trip Sixes) > K♣ 3♥.

Nguyen Takes the Heads-Up in One Hand

Dinh Tuan Nguyen took a 5 million -v- 4 million chip advantage into the heads-up against Daniel Bonfield, and jammed his chip stack into the middle on the first hand of the heads-up with 10♥ 7♥. Bonfield snap-called with A♦ 8♦ and the cards were on their backs. The flop of 4♥ 5♥ 10♣ put Nguyen into the lead in the hand, and he improved to trip Tens when the 10♦ was dealt on the Turn – making the 5♠ on the River irrelevant.

Please note that the top five prizes are correct after a deal was made during five-handed play.