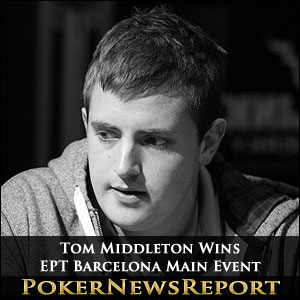 UK poker player Tom “hitthehole” Middleton won the EPT Barcelona Main Event after an intriguing final day, during which the online qualifier for the tournament was the most active player and the recipient of some raucous support from the rail.

Middleton had been on top of the leaderboard at the close of play for each of the three successive days, and although the online high stakes player received a lot of respect from his opponents, the day was not to go exactly to plan.

Setting the Scene for the EPT Barcelona Final Table

Going into the final day of the EPT Barcelona Main Event, Tom Middleton held a chip advantage of more than two million chips over Denmark´s Kresten Nielsen. At the other end of the leaderboard Eduard Bhaggoe and Kimmo Kurko were the two players most at risk as the game entered Level 32 (blinds 80,000/160,000 – ante 20,000).

Tom Middleton started the final table of the EPT Barcelona Main Event like a man on a mission. Three times his opening raises enabled him to pick up the blinds and antes, and only a shove by from the blinds by Eduard Bhaggoe prevented him from taking four in a row. Within no time at all, Middleton had gone through the 10 million chip barrier.

However, the opening exchanges also saw Kimmo Kurko move into a challenging position. The Finn – continuing the “custom” of wearing a glittering Fedora at an EPT Final Table – added more than one million chips to his stack when four-bet shoving pre-flop in a hand against Kresten Nielsen and Andreas Christoforou, and then eliminated Christoforo in eighth J♥ J♦ > A♣ J♣ to add another two million chips.

Nielsen Trips Up into Lead as Middleton Slips Down to Last

Tom Middleton´s high level of activity was leaving him open to be shot at, and he slipped from the chip lead when Eduard Bhaggoe was lucky to hit the 5♥ on the flop to double up against the chip leader A♦ 5♠ > A♠ Q♦. Middleton then helped Kresten Nielsen into the chip lead when shipping the Dane 1.5 million chips in a Flush > Flush hand, and Nielsen (K♠ 2♠) cemented his lead at the top of the chip counts when four-betting Benoit Gury (A♣ 8♣) and Tom Middleton (7♦ 7♠) out of a pot on a flop of K♦ 4♦ K♣.

Eduard Bhaggoe´s luck ran out just before the end of the first level when his 10♠ 10♣ was looking good to double up on a board of 7♦ 10♦ 8♥ against Kimmo Kurko´s A♥ K♦, but the 2♦ on the Turn and 4♦ on the River completed Kurko´s flush draw and Bhaggoe was sent to the rail in seventh. Tom Middleton´s fortunes also continued to tumble, and a failed bluff against Luca Fiorini saw him leak another two million chips and tumble to the foot of the chip counts with just six players remaining.

Middleton getting Better – Nothing can help Fiorini!

Luca Fiorini also briefly flirted with the chip lead – having bust Pasi Sormunen in fifth place A♠ K♣ > K♦ 7♦, to become the fourth player to head the chip counts within two levels of play. However, his stop at the top of the leaderboard was to last less than 30 minutes as he first doubled up Kimmo Kurko 10♥ 7♣ (Seven paired on the Flop) > 10♦ 9♦, and then bust out in fourth when running A♥ J♦ into Tom Middleton´s Q♦ Q♣ and failing to find an Ace on the board.

Three handed play was to last a matter of minutes. Kresten Nielsen (K♦ 8♦) raised from the small blind and Kimmo Kurko (7♦ 4♦) defended his blind with a call. The flop of 5♥ 8♠ 6♦ gave Nielsen top pair, but had also given Kurko a flopped straight. Therefore, when Nielsen started the post-flop betting with 635,000, Kurko was more than happy to raise to 1.4 million chips. Nielsen responded with a 3.325 million three-bet to which Kurko responded by announcing he was all-in.

Nielsen was visibly shaken to see Kurko table a straight and, although the 5♣ on the Turn presented Nielsen with the possibility of making a Full House, the Q♥ on the River ended his participation in the EPT Barcelona Main Event and enabled Kimmo Kurko to take a 19.6 million -v- 17.2 chip advantage into the heads-up against Tom Middleton.

A deal at the beginning of a heads-up encounter is normally a signal of a quick finish between two happy players, but it was not to be the case in the climax of the EPT Barcelona Main Event. Play continued for almost three hours with the chip lead changing hands regularly;, until the beginning of Level 36 (blinds 200,000/400,000 – ante 50,000) by which time relentless pressure by Tom Middleton had enabled him to build a chip lead of 25 million -v- 12 million chips.

The action in the final hand was initiated by Kurko – who moved all-in with A♦ 4♠ after Middleton had three-bet Kurko´s opening bet to 1.2 million chips. Middleton turned over 5♠ 5♥ and managed to avoid a sweat on the board of 10♥ 6♣ 7♣ / K♥ / 8♥ to become the EPT Barcelona Main Event Champion in front of dozens of vociferous supporters.