Mikalai Pobal was literally the last man standing at the EPT Barcelona Main Event after his two table opponents engaged in a little dinner break drinking. 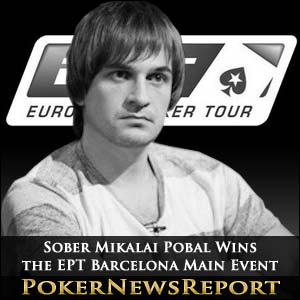 Mikalai Pobal was literally the last man standing at the EPT Barcelona Main Event after his two table opponents engaged in a little dinner break drinking.

“I don´t think it changed too much” said Joni Joukamainen, the one-time chip leader who owed almost 75 percent of the chips in play when the table was three-handed. “We just wanted to have some fun”. Jouhkamainen´s “partner-in-crime” was fellow Finn Ilari Sahamies – the man who had been favourite to win the tournament after going into the final day with more chips than any of his opponents – and only John Juanda having more experience.

However, Juanda´s experience accounted for little when he was the first player to depart after just eleven hands. Getting his chips in the middle from the big blind with 5♣ 5♠, Samuel Rodriguez called with A♥ 5♥. Juanda looked good after the flop of 8♦ 4♣ 8♣ and turn of 7♣ eliminated the A♣ as an option for the Spaniard, but the 7♠ on the river gave both players two pairs (Sevens and Eights) – with Rodriguez having the Ace kicker.

Juanda´s elimination sparked three more bust-out´s in quick succession. First Anton Duda ran his A♦ K♠ into the pocket Kings of Anaras Alekberovas on a flop of Q♠ K♣ A♥ and got no help from the turn or river to overcome Alekberovas´ set. Anaras Alekberovas was also responsible for the departure of Sinel Anton in sixth, when his 10♣ 10♠ hit a set on the flop against Anton´s A♥ Q♣, while Joni Jouhkimainen – who had already rivered a spade to stay alive against Samuel Rodriguez in an earlier hand – did exactly the same in the hand which sent the Spaniard to the rail. Going into four-handed play, Jouhkimainen had gone from last-to-first.

A long period of very cagey play followed the four quick eliminations with very little changing in the order of the players. Joni Jouhkimainen had used his chip advantage to increase his lead up to 19 million at the expense of Sahamies and Alekberovas, and it was Alekberovas who was to become his next victim when the Lithuanian´s 9♠ 9♥ failed to improve against Jouhkimainen´s K♠ K♦. With 23.8 million of the 32.2 million chips in play, Jouhkimainen´s lead looked unassailable, however both Pobal and Sahamies doubled up against the chip leader in quick succession and – following a liquid lunch from which the two Finnish players returned wearing sparkling Fedora hats – the game was turned on its head.

A six-bet shove from Sahamies forced Jouhkimainen to forgo a valuable pot and take the chip lead – at which point the hats were changed between the Finns. Mikalai Pobol then rivered an ace flush and turned a straight in successive hands against Jouhkimainen to chip up to 17 million chips before Sahamies eliminated his compatriot when pairing an ace on the flop with the A♥ J♣ in his hand against Jouhkimainen´s 9♣ 9♠.

The heads up between Pobal and Sahamies lasted just fifteen minutes.  Pobal first hit a better two pair on the flop to relieve Sahamies of 2 million chips, followed this with hitting trip Kings against Sahamies J♣ 2♣ and finished up by showing A♦ A♥ when Sahamies shoved the remainder of his chips into the middle of the table with 9♠ 5♠. It had been a great week for Ilari Sahamies considering his final table appearance in the Super Hi-Rollers Event, but he was to leave Barcelona without a title as A♠ was revealed on the flop to hand Mikalai Pobal the tournament and winner´s cheque for €1,007,550.