The combined UKIPT/EPT London gets underway today, with players being warned to get their documentation organised in good time to avoid later delays. 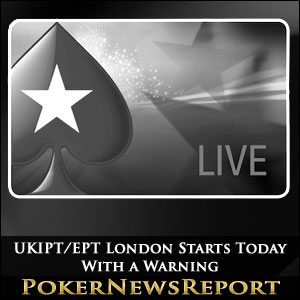 The combined UKIPT/EPT London gets underway today, with players being warned to get their documentation organised in good time to avoid later delays.

The highly anticipated UK and Ireland Poker Tour/European Poker Tour in London starts today, and players have been advised to sort out the documents they need in order to participate in the events and to “save time, stress and head scratching” as the feature tournaments draw closer.

According to the PokerStars blog, players competing in any of the UKIPT/EPT London poker tournaments scheduled for the Grand Connaught Rooms will need both a PS Live Card and a Hippodrome Friends Card in order to take their seats at the tables.

Where to Get the Cards From

Players who have attended an EPT event in the past twelve months should automatically have a PS Live Card (the quick-registration system was introduced in Barcelona last year). If not, they will be available from the registration desk in the Grand Connaught Rooms one hour before the start of each tournament (you will need a valid photo ID to get one).

The Hippodrome Fiends Card is available from the Hippodrome Casino in Leicester Square (about ten minutes walk from the Grand Connaught Rooms venue in Covent Garden) where it is also possible to buy directly into the UKIPT and EPT London Main Events already, or into any of the side events scheduled to compliment the main attractions from 10.00am the previous day.

Key Events in the Schedule

PokerStars´ warning has been issued to avoid potential delays as key events in the schedule get underway. This year´s ESPT/EPT Barcelona saw long queues develop at the start of both the Estrellas Poker Tour Main Event and the EPT Barcelona Main Event, and PokerStars obviously (sensibly) want to avoid a repeat of that scenario.

Today will be the first test to see if the warning has got through to players when Day 1A of the UKIPT Main Event gets underway, with other key events over the next two weeks that have the potential for delays being:-

* One of five events that start or resume within an hour on this particular day.

Enjoy the UKIPT/EPT London – Get Your Cards Early

By listening to the advice offered by PokerStars, players should get greater enjoyment out of the series of tournaments. It is quite a nice walk between Covent Garden and Leicester Square (along Great Queen Street and Long Acre) and although the today will be overcast with a few showers coming from the south-east, the weather for the remainder of the UKIPT/EPT London promises to be fair.