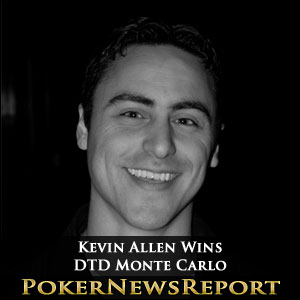 Going into the final day of the Monte Carlo event at Nottingham´s Dusk Till Dawn poker club, 30 of the 504 players who entered the £1,100 buy-in event remained in the tournament, including top UK poker players John Eames, Ben Jenkins, James Atkin and Dave Ulliot.

It did not take long for the first of the players to make their moves towards the final table. Andrew Wayman was quickest out of the blocks, and was responsible for eliminating Guy Johnson in the third hand of the day (A♥ Q♥ > A♦ J♦), but his enthusiasm was to be his downfall when he called Kevin Allen´s (J♦ J♥) five-bet pre-flop shove with A♣ K♠ and the board ran Nine high.

Although improving Kevin Allen´s position, his KO of Andrew Wayman failed to give him the chip lead. That honour went to Joe Cahill, who bust Simon Higgins (77 > A10) while Kevin Allen doubled up Dave Ulliot (A7 > 66 – Ulliot flopped Quads!). Ulliot´s good fortune was also not to last long either – Ulliot getting his chips committed to the pot with AKo against James Atkin´s pocket Nines and the 9♦ being the first card out on the flop.

As the tournament was reduced down to the last two tables, James Atkin took the chip lead for the first time – coming from behind to eliminate John Eames (44 > 77) and then rivering trip Aces to crush Lee Williamson. Joe Cahill closed the gap when rivering a diamond flush with 10♠ 10♦ to knock out Mitch Johnson (A♠ 8♣), but it was Rick Trigg who took the chip lead next – pairing his K♥ on the flop to cripple Ben Jenkins and eliminating Ray MacIntosh in 14th (AK > AQ).

James Atkin fought back, and took a massive chip lead to the final table when hitting a set of Sixes to crack Basharat Mahmood´s pocket Aces and followed that up by busting Joe Cahill in ninth (A♦ 9♦ – 9♦ paired – > 8♠ 8♣).

Timothy Chung was the first player to leave the final table – running his K9 into the KQ of Kevin Allen and Allen getting their courtesy of his better kicker. Lee Williamson doubled up with trip Queens against James Atkin, but Emyr Wyn Lewis was bust in seventh when his K10 failed to connect with the board against Jamie Rutherford´s pocket Nines.

Lee Williamson´s charmed life did not last much longer – running his pocket Fives into the pocket Nines of Rick Trigg – and the table went four handed when Kevin Allen´s A♥ Q♥ held on against Ben Jenkins 10♣ 8♣ to give Allen the shared chip lead with James Atkin.

Allen Up – Rutherford and Atkin Both Bust with Fives

Kevin Allen went into a clear chip advantage after taking a massive pot against James Atkin (AJ > KJ on a Jack high flop) and forcing a five-bet 1 million chip fold from Jamie Rutherford, but Rick Trigg was able to double up against the chip leader when he flopped a diamond flush to crack Allen´s K♣ K♠.

Allen chipped up once again to have half the chips in play when eliminating Jamie Rutherford in fourth (trip Kings > 55) and pocket Fives were also to be James Atkin´s downfall – calling Rick Trigg´s shove with K♣ J♣ and then watching as Trigg hit two pairs on the flop. Despite his big win, Rick Trigg was still 2 million chips behind Kevin Allen as the two players went heads-up (blinds 50K/100K).

The heads-up finale of the DTD Monte Carlo was one of the most gripping seen at the Nottingham poker club. The first shove by Rick Trigg (K♠ 10♥) saw Kevin Allen (K♦ Q♦) in the lead with a paired Queen on the (QJ3) flop and (10) turn, but a Nine on the river gave meant that both players made King-high straights and shared the pot.

Kevin Allen took a 2:1 chip lead when forcing Rick Trigg out of a 2.5 million chip pot, but Trigg reversed the chip stacks almost immediately when doubling up with a paired 10 to best Allen´s Q♣ J♣. Astonishingly, Kevin Allen doubled back straight away when hitting a higher straight than Rick Trigg on the river (K8 > 34) and then wrapped the Monte Carlo up when his 10♣ 9♣ found two pairs on the flop to best Rick Trigg´s paired Ace.