888Poker has a Very Bad Day 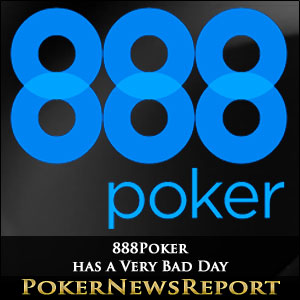 Yesterday was a really bad day for 888Poker. The botched signing of Luis Suarez as an 888Poker Ambassador and lack of a promised promotion to accompany the event were overshadowed by confusion regarding players´ accounts in Mexico being either closed without reason or potentially hacked.

Whereas mishandled PR currently seems to be the norm at present (WPT´s “smoke and mirrors” rebranding of the Deepstacks Tour and the WSOP´s ad for online poker are just two recent examples) 888Poker´s Customer Service Department has been uncharacteristically slow in addressing the situation in Mexico – which, at the time of writing, remains unresolved.

Early yesterday morning, reports started to appear that 888Poker was withdrawing from the Mexican online poker market. Players went on the popular 2+2 poker forum to raise awareness that their accounts were being closed and funds being cashed out involuntarily. Some players – including US poker refugee Kevin MacPhee – said that they had received emails allegedly from 888Poker´s Customer Support, while others reported that a pop-up message advised them that their accounts were suspended when they tried to log in.

Many of the emails purporting to be from the genuine operations@cassava.net email address requested bank information and appeared in players´ spam folders, suggesting that they were not legitimate; however, when telephoning 888Poker´s customer support, players were told that they had to deal with their issues by email and it would take up to 72 hours to receive a reply.

At PokerNewsReport, we tend to get quite a lot of spam emails which suggest that they come from bona fide online poker companies. Our advice to any player who has received an email requesting details of their personal bank accounts is DO NOT REPLY TO THIS EMAIL. It is more than likely to be a phishing scam, and something that 888Poker should make a public statement about without any further delay.

The choice of Luis Suarez as an ambassador for 888Poker raised more than a few eyebrows. Undoubtedly the Liverpool FC and Uruguayan soccer star has talent on the football pitch, but he also has a reputation for cheating, and – in all the years he has played for Liverpool FC – he has only ever won the equivalent of a $5.00 Sit n Go (Liverpool´s League Cup victory in 2012).

His fanfare introduction to the world as an 888Poker ambassador at a sparsely-attended press conference in Barcelona started as a farce, when the entrance of Itai Pazner – Senior Vice president of 888Poker – was hijacked by a promo video, continued as a farce with appalling sound quality that even Spanish speakers found hard to understand, and finished as a farce as Luis Suarez was presented with an 888Poker soccer shirt bearing his name that was barely wide enough to fit a man half his stature.

With the World Cup just twenty-eight days away, 888Poker were meant to be launching a “Football Carnival” to coincide with the signing of Luis Suarez as an 888Poker ambassador – only whoever is in charge of launching the promotion forgot to read the script and tell anybody what the promotion would be (and we are still waiting 888Poker Promotions Department if you would like to email us).

This latest faux pas by 888Poker´s Promotions Department comes on the back of criticism over the 80% rakeback offer that went pear-shaped in New Jersey, the Snap Poker/Jet Fighter promotion that they only told people about the week after it started, and the Millionaire Genie Madness promotion which is heavily promoted on the 888Poker client, but which is not a poker promotion at all, but a slot game promotion.

We wait to hear what 888Poker has to say about the Mexican issue, and hope that when they do eventually release their “Football Carnival” promotion, it is handled better than the farce in Barcelona yesterday – a very bad day for 888Poker.