Yesterday´s traditional pre-WSOP conference call was dominated by the action that will be taking place on the virtual felt rather than on the Rio´s tables. 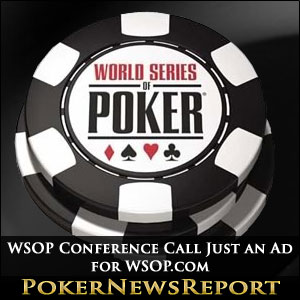 Yesterday´s traditional pre-WSOP conference call was dominated by the action that will be taking place on the virtual felt rather than on the Rio´s tables.

The World Series of Poker gets underway at the Rio All-Suite Hotel and Casino in just two weeks time, and in what has become a tradition in recent years, a conference call was staged yesterday in order for WSOP officials to answer questions from the press and other interested parties.

Hosting the conference call, WSOP.com Editor-in-Chief Seth Palansky introduced WSOP Executive Director Ty Stewart and WSOP Tournament Director Jack Effel; but other than the announcement that the venue had been re-carpeted and had new chairs, the only “news” that the pair could muster was that Frisbee dogs would entertain players before the Shuffle Up and Deal command.

It´s All About WSOP.com

With 2014 being the first year that WSOP.com has been able to provide online poker in Nevada, much of the conference call was dedicated to what will be available for players attending the WSOP on the virtual felt. Bill Rini – Head of Online Poker at WSOP.com – used his spot on the WSOP conference call to list a series of online initiatives being offered while the World Series of Poker is in progress.

These included a 100% match bonus on deposits into WSOP.com accounts up to $1,000, the facility for players to deposit into their accounts via the Rio Cashier cages (although withdrawals are not yet available), multiple satellites into WSOP bracelet events, and a WSOP.com “High-Roller” Series that will start on Sunday 25th May and offer $200,000 in guaranteed prize pools between seven events.

A further $2 million guaranteed Stacked Summer online poker series will be announced on 25th May, and an online Sit n Go leaderboard competition will be hosted throughout the duration of the live Series – with Turbo Sit n Go games being hosted online during live tournament dinner breaks. There is also going to be an area on the stage in the Pavilion Room – already dubbed The Grind Room – where players can go to play on WSOP.com.

For the first time ever – and possibly because of the lack of news that Stewart and Effel could muster – 2013 WSOP Main Event Champion Ryan Riess entered the conversation. Riess, who has only managed two min-cashes in WPT events since his $8 million victory last year, said that he will miss the first week of live action in Las Vegas due to attending the WSOP National Championships in Atlantic City, but thereafter he intends to play in 15-20 events.

When quizzed about his possible participation in the Big One for One Drop, Riess admitted that he was trying to sell action to raise the funds for one of the twenty-three seats that remain. Ty Stewart acknowledged that it was difficult to raise the $1 million buy-in, but said he was confident the 56-player cap would be reached. Riess´ final words on the WSOP conference call were words of advice for the 2014 WSOP Main Event Champion – Just enjoy it he said. Have fun. Embrace the opportunity.

Anything Else Players Should Know?

Other than the more comfortable seating arrangements, players will be delighted to discover that the 5:00pm events have been brought forward to a 4:00pm start time so that participants can get in ten levels of poker without a dinner break to make it more likely that events do not overrun and upset the WSOP schedule. Furthermore, souvenir poker chips will be made available in the Rio´s gift shop, so that players will not have to remove them from the tables – or come to the World Series of Poker with their own!

Bring on the Frisbee Dogs!