Ryan Riess clawed his way back from a chip deficit of almost 20 million to win the World Series of Poker Main Event and take home the $8,361,570 first prize. 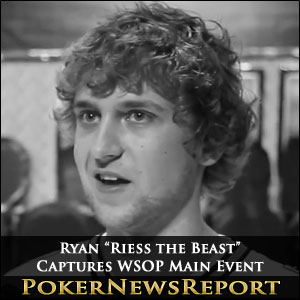 Ryan Riess clawed his way back from a chip deficit of almost 20 million to win the World Series of Poker Main Event and take home the $8,361,570 first prize.

The conclusion to the WSOP Main Event was a gripping affair which was played within an electric atmosphere and was packed full of drama as Ryan Riess quickly made up the chip deficit in the first few hands of the heads-up, then took the chip lead, then lost it again, then took a commanding chip lead only for his opponent Jay Farber – to double back up and extend the heads-up to almost four hours.

Eventually, the stronger player of the two on the day won the WSOP Main Event bracelet and $8,361,570 first prize, but full credit should go the Jay Farber for making the climax to the World Series of Poker Main Event an intriguing and fascinating occasion.

Setting the Scene for the Heads-Up

Jay Farber had taken a significant chip advantage at the final table on Monday when he eliminated Marc-Etienne McLaughlin A♠ A♣ > K♥ K♠ in fifth, and then owned more than 50 percent of the chips in play when busting November Nine chip leader JC Tran in fourth (K♠ Q♥ > A♥ 7♠. Ryan Riess had held the chip lead up to that point since winning a massive three-way pot when the games was still seven-handed, and kept himself in contention for the WSOP Main Event title when eliminating Amir Levahot in third place 10♣ 10♦ > 7♠ 7♦.

When play resumed at the Penn and Teller Theatre in Las Vegas, the game was just five hands into Level 39 (blinds 500K/1,000K – ante 150K). The two players exchanged blinds in the first couple of hands, but in the third, Ryan Riess opened the betting 2.6 million chips, to which Farber responded by raising to 4.5 million chips. Riess called, and the two players saw the flop of K♠ Q♦ 8♣, after which Farber bet 3.4 million. Riess raised to 9 million chips and Farber let the hand go to close the gap between the two protagonists to just 3 million chips.

The gap between the two players remained pretty constant for the next twenty hands, and then Ryan Riess swept into the chip lead when he bet 15 million chips into a pot which already contained 36.4 million chips on a board of A♣ 8♥ 4♦ / 7♦ / A♠. Jay Farber counted out the chips to make the call but, after several minute´s deliberation, decided to muck his cards and give Riess the advantage in the heads-up.

Farber Battles Back into Lead – For Just One Hand

Just a few hands later, Jay Farber was back in the chip lead. Ryan Riess was again the aggressor – leading the betting pre-flop, post-flop (3♥ 3♠ 7♣) and after the Turn (2♣); but after the River (9♠) was dealt, Farber lead out for 24.5 million chips – about three-quarters of the pot – and, after reflecting on his decision for a while, Ryan Riess decided that better opportunities lay ahead.

Indeed, in the very next hand, Riess took down an 8.5 million chip pot with A♥ 3♣ to regain a narrow advantage, but it was the thirty-third hand of heads-up play which was pivotal in deciding the 2013 WSOP Main Event Champion. From the button, Jay Farber had three-bet to 8.8 million chips and was called by Riess. After the flop of 8♦ 4♠ 3♣, Riess called Farber´s raise of 6.7 million chips, and Farber was again the aggressor for 13.6 million chips following the Turn of 2♥. Both players checked the River 7♠ and Riess showed an overpair J♣ J♥ to take down the 58.5 million chip pot and build a 2:1 chip lead.

Over the next hour, Ryan Riess was completely dominant. Except for a few small pots which Farber took with minor pairs and the rare act of pre-flop aggression, Riess ground his opponent down to extend his lead to 169.825 million -v- 20.850 million. Farber doubled up when, on a flop of K♣ 5♥ Q♠, he shoved all-in with J♣ 10♠ and was immediately called by Ryan Riess who held the dominant K♠ 10♥. The board completed 9♥ and Q♣ to give Farber a straight and keep his tournament alive, and a rivered club Flush soon after enabled Farber to recover to a chip stack of 65.4 million chips.

However, Riess continued to grind Farber down and, any time Farber tried to match his opponent´s aggression, Riess had the better cards. A flopped pair of Tens and then Trip Nines in consecutive hands enabled Riess to chip up to having 85 percent of the chips in play. A couple of uncontested shoves enabled Farber to pick up the blinds and antes of 600K/1,200K – 500K, but his third shove was to signal his ultimate down fall.

Down to his last 14 million chips, Jay Farber pushed them all forward in the ninetieth hand of the heads-up with Q♠ 5♠. Ryan Riess had an easy call to make with A♥ K♥ and the cards were on their backs.

The flop of J♦ 10♦ 4♣ meant that Farber was now reduced to three outs (any Five), as any Queen would give Riess a Broadway straight, but the 3♣ and 4♦ bricked for Farber, and Ryan Riess was the winner of the 2013 World Series of Poker Main Event.