Germans Aim to Make a Splash at WSOP One Drop

The latest list of confirmed entries for the WSOP Big One for One Drop sees five significant German players setting their sights on a $20 million payday. 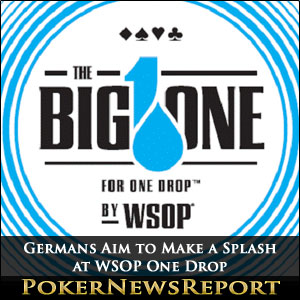 The latest list of confirmed entries for the WSOP Big One for One Drop sees five significant German players setting their sights on a $20 million payday.

Yesterday Seth Palansky – Editor-in-Chief for WSOP.com – broke the news that ten further players had confirmed their participation in this year´s $1 million buy-in Big One for One Drop, bringing the total number of players registered for the event to thirty.

Most eyes were drawn to Vanessa Selbst´s inclusion in the list – the first woman to compete in the valuable event – and the personable Jean-Robert Bellande; but possibly the most significant names to appear on the list were those of Fabian Quoss, Max Altergott, Tobias Reinkemeier, Christophe Vogelsang and Niklas Heinecker – between them winners of more than $21.5 million in big buy-in tournaments.

One Drop Funf Join Gruissem with More to Come

Yesterday´s “One Drop Funf” join the already-registered Philipp Gruissem in the line-up for the WSOP Big One for One Drop, and there could potentially be as many as ten players representing Germany when the cards are in the air for the June 29th event.

Betting for the event includes Ole Schemion and Marvin Rettenmeier among the favourites to win – even though their participation has not yet been confirmed – while it is unsure whether Benny Spindler and Martin Finger will try to qualify their way into the event via one of the live satellites to be hosted at the WSOP, the Aria and the Bellagio.

One German player who is unlikely to feature in the One Drop line-up is 2011 WSOP Main Event winner Pius Heinz. Heinz has pretty much dropped out of the live poker scene over the past couple of years, and despite playing in recent EPT events, he has previously admitted that he hates Vegas and would be unlikely to return.

Who Else is On the One Drop List – Who Else Can We Expect?

In addition to Selbst, Bellande and the One Drop Funf, Anthony Gregg – winner of last year´s $100,000 buy-in One Drop High Rollers – is now committed to taking part in this year´s event, as is Russian Igor Kurganov, who recently finished third in the EPT Monaco Super High Rollers for $1.55 million. The list of new entrants is completed by an anonymous Asian businessman who Palansky described as “one of the most intriguing additions to the event this year”

With thirty players now confirmed for the WSOP Big One for One Drop – and three seats set aside for the live satellites – only twenty-three seats remain available for late registering players. Betting for the event suggests that Mike McDonald, Eugene Katchalov and Isaac Haxton will find funding for the buy-in, while Phil Hellmuth has reiterated that he will see how he is playing before committing such a substantial slice of his bankroll.

One player who is publicly looking for funding is Daniel Negreanu. Negreanu went on Twitter this morning to inform his followers that he is selling 50% of his action in the tournament in $5,000 chunks. Negreanu claims he is a cert for victory and – judging by his Twitter timeline – has already received plenty of offers. Interested players have until 1st June to complete their deals with Kid Poker, although it should be noted that Negreanu´s recent history for cashing in freezeout tournaments is pretty dismal.