Daniel Colman won the EPT Grand Final Super High Rollers for €1,537,300 after being the only player to fire three bullets in the €100,000 buy-in tournament. 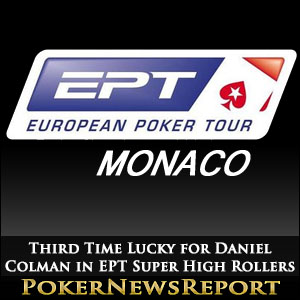 Daniel Colman won the EPT Grand Final Super High Rollers for €1,537,300 after being the only player to fire three bullets in the €100,000 buy-in tournament.

There was a marathon conclusion to the EPT Grand Final Super High Rollers on Saturday night, as players from the States and Asia battled it out on the virtual felt against Europe´s finest for their share of the €6 million plus prize pool.

The final table had been set on Friday, when Daniel Colman´s A♠ Q♠ paired on the flop to best Mike McDonald´s 6♣ 6♦ and eliminate McDonald out of the money, and the eight remaining players were each assured of a min-cash of €241,000.

Kurganov Rises from Last to First – Busquet Not So Fortunate

When the eight players took their seats at the Monte Carlo Bay Resort for the climax of the EPT Grand Final Super High Rollers the tournament resumed in Level 16 (blinds 15,000/30,000 – ante 4,000), and much of the action during the first couple of levels centred around the Russian player Igor Kurganov.

From going into the final day of the EPT Super High Rollers as the shortest stack, Kurganov got two fortunate early double ups (Q♦ 10♦ > Paul Phua´s A♠ K♠ and A♣ 4♣ > Ole Schemion´s A♥ Q♥), and then a more conventional double-up against Ole Schemion 10♥ 10♣ > A♠ K♦, before taking down a four-way pot pre-flop with A♣ A♦.

Igor Kurganov´s Lazerus-esque recovery was completed when his A♣ 6♣ turned Trip Sixes and he took a substantial pot from Rono Lo (5♥ 2♥) who missed his flush draw on the River. At the other end of the leaderboard, Olivier Busquet had been crippled by Paul Phua A♣ A♦ > 10♠ 10♦, and Busquet was the first player to depart at the beginning of Level 18, when his 9♠ 8♦ made a straight on the River, but came second best to Dan Cate´s Full House.

Ole Schemion had been struggling with a chip stack of around thirty big blinds ever since twice doubling up Igor Kurganov, and he was the next player to depart in seventh place, when running his pocket Nines into the pocket Jacks of Daniel Colman, but Schemion still had reason to be happy, as he had won his seat in the EPT Super High Rollers in a €10,000 live satellite the day before the tournament had begun, and walked away with €307,000.

A paired Queen against Igor Kurganov´s Ace-high took Daniel Colman into the chip lead, and he extended his advantage in the second hand after the dinner break (Level 21 – blinds 50,000/100,000 – ante 10,000) when sending Paul Phua to the rail in sixth place A♣ J♠ > 8♦ 7♦; and then chipped up to beyond 6 million chips when forcing Dan Cates out of a 1.2 million chip pot.

Asian involvement in the EPT Grand Final Super High Rollers ended soon after – Igor Kurganov busting Rono Lo in fifth place A♠ J♥ > K♥ 9♥, and Daniel Colman (5♠ 5♦) making a set of Fives on the flop to see off Richard Yong (K♥ J♦) in fourth place. Thereafter the three remaining players agreed a deal, which would see each lock up the following amounts and leaving €115,400 for the second placed player and €241,000 for the winner:

No Quick Resolution to Three-Handed Play

Despite the deal being made, there was no quick conclusion to the EPT Super High Rollers. A further level was played out with the only significant change in the standings being when Dan Cates got three streets of value with A♦ A♣ to reduce Igor Kurganov to 1.8 million chips.

Igor Kurganov was eventually eliminated in third place, but in exceptionally unfortunate circumstances – calling Daniel Colman´s (Q♠ 8♦) shove with A♣ 2♣ and being a mile ahead after the flop of A♥ Q♥ 10♥. The 9♣ on the Turn made the Russian an 80% favourite for yet another double up, but the 8♠ spiked on the River to give Colman the hand and send Kurganov to the rail in third place.

The Battle of the Dans Sees Colman Victorious

Despite eliminating Igor Kurganov in third place, Daniel Colman was at a 5.875 million -v- 9.625 million chip disadvantage going into the heads-up against Dan Cates. However, Colman quickly regained the initiative when Dan Cates (Q♦ 6♦) missed his flush draw against Colman´s A♣ Q♥, and Colman extended his lead further when Cates (8♦ 5♠) could not find the cards he needed after the flop of 4♥ 3♠ 6♣ to complete his open-ended straight draw and improve past Colman´s 10♦ 10♠.

The final hand of the EPT Grand Final Super High Rollers saw Dan Cates (now reduced to 2.275 million chips) move all-in with Q♦ 10♣ and Daniel Coleman make the call with K♠ 6♥. The flop of 3♣ 9♦ 6♦ paired Colman´s Six, but Cates still had overcards and the chance of a runner-runner flush draw. Unfortunately for the WPT Alpha8 winner, the board completed 3♥ and A♥, and Daniel Colman had joined the elite band of EPT Super High Roller champions.