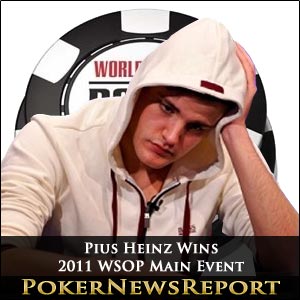 Although many people anticipated the overnight chip leader’s victory – few could have imagined the manner in which it was achieved, the electrifying start to the climax of the tournament and the compelling come-from-behind battle that he eventually won after six hours of heads up play.

Chip Counts at the Start of Play

In contrast with Sunday´s very tentative start to proceedings, the players were not hanging about when UFC Front man Bruce Buffer announced the “shuffle up and deal”.  In the first hand of the day, Martin Staszko doubled up against Ben Lamb after the American shoved with K♥ J♦ and Staszko put his tournament life on the line with 7♠ 7♣. The board ran 9♥ 3♥ 2♦ / 3♠ / 10♣ to give Staszko the perfect start to the day and to drop Ben Lamb to 12.7 million chips.

Before the crowd could absorb what had just happened, Martin Staszko had taken the chip lead. With blinds of 600K/1.2M and an ante of 200K, Martin Staszko made it 3 million to play from the small blind and Pius Heinz in the big blind called. The flop of 9♥ A♣ 6♠ prompted a continuation bet of 3 million from Staszko, which again was called by Heinz. Both players checked the 9♦, but following the J♣ on the river, Staszko bet 4.5 million. Heinz responded by raising to 14.2 million, which Staszko thought about and then called – his K♣ K♦ being too hot for Heinz´s K♥ Q♦.

Hand 3 was uneventful in relation to what had already happened, but Hand 4 of the day saw the elimination of many people´s favourite to win the tournament, Ben Lamb. Pius Heinz folded from the button and Ben Lamb shoved the last of his chips into the middle with Q♠ 6♥. Martin Staszko made the call with J♠ J♣ and the crowd rose to its feet to watch the board cards being dealt.

The 5♥ 5♣ 2♠ offered no help at all, and the 2♣ on the turn meant that only a Queen on the river would keep Lamb alive. The 7♠ was not the card he wanted to see, and Ben Lamb was eliminated in third place in the fourth hand of the day for $4,021,138 and the WSOP Player of the Year title.

The Heads Up – The Online Poker King v The Chess Master

An incredible ding-dong battle of wits ensued throughout the enthralling climax of the World Series of Poker Main Event. Pius Heinz grabbed back the lead within four hands, when forcing a fold from Staszko in a pot that contained nearly 50 million chips, but as play entered Level 41 (800K/1.6M ante 200K) Staszko hit a better two pair than Heinz to take back the lead. With the two players closely matched in chip stacks and levels of skill, the chip lead swapped back and forth several times over the next three hours of play.

Martin Staszko put some daylight between himself and Pius Heinz as Level 42 (1M/2M ante300K) of the tournament began. Both players had checked the flop of J♥ 10♣ 3♥, but Heinz bet 3 million on the Q♥ turn. Staszko raised to 7.5 million and Heinz called. The German checked through on the 6♠ river, but Staszko fired in another 10 million chip bet which Heinz called – a bad call as it transpired, as the Czech turned over K♦ 9♣ for the straight and a 38 million chip pot.

Heinz Fights Back to Lead

Despite extending his chip advantage to almost 4:1 when Pius Heinz dipped to below 45 million chips, Martin Staszko was unable to finish the German off. A run of five consecutive pots saw Pius Heinz recover to a less than 2:1 deficit and it the first hand of Level 43 (1.2M/2.4M ante 300K) the tide turned once again to the German´s favour – big time!

Staszko had limped in from the button and Heinz had raised to 7.9 million. Staszko called and both players saw the flop of 10♣ 7♣ K♠. Heinz sent out another 8.2 million, but Staszko raised to 17.5 million. Heinz pondered his decision for a while and then announced he was all-in. Staszko did not take long to make the call, and when the cards were tabled you could see why.

Although Heinz was ahead, Martin Staszko had plenty of opportunities to complete the victory with this hand – a Nine or any club dealt on the turn or river would make him world champion. Unfortunately for Staszko, the 3♥ and 6♠ enabled the German to double up and reduce the Czech to less than twenty big blinds.

Although Martin Staszko fought back to get his chip stack back over 50 million, it was all over twelve hands later. Staszko shoved the remainder of his chips from the button with 10♣ 7♣ and it was an easy call to make for Pius Heinz with A♠ K♣. The flop of 5♣ 2♦ 9♠ was inconclusive but the J♥ on the turn increased Staszko´s outs to include a gutshot straight. However, the 4♦ ended the Czech player´s dreams as the young German player ran over to the rail to be mobbed by those who had witnessed an astonishing and absorbing six hour climax to the most prestigious live poker tournament in the world.

Pius Heinz´s reward for winning the WSOP Main Event is the champion´s bracelet – the most coveted prize in poker – and a cheque for $8,715,638. Martin Staszko will collect $5,433,086 for his magnificent contribution to the Main Event, and the rest of the November Nine payouts look like this:-