888Poker is offering players the chance to win the flight of their lives in an exhilarating new freeroll promotion that concludes with a fighter jet experience. 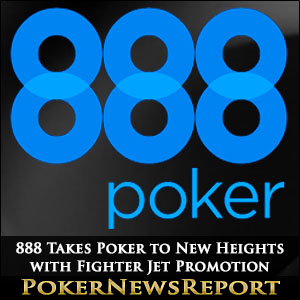 888Poker is offering players the chance to win the flight of their lives in an exhilarating new freeroll promotion that concludes with a fighter jet experience.

[geolink href=”https://www.pokernewsreport.com/888-poker”]888Poker[/geolink] is currently hosting a $250,000 series of freeroll tournaments to promote their new fast-fold SNAP poker tournaments, in which not only can players win valuable cash prizes, but also a thrill-of-a-lifetime flight in an L-39 Albatross fighter jet.

In the promotion, two Extreme $5,000 freeroll tournaments are held every day (at 09:09 GMT and 19:09 GMT), with the top 1,500 players winning cash prizes and the top 600 also receiving a ticket to the following Wednesday´s Fighter Jet Flight Freeroll – where the winner will receive an exclusive 888Poker package which includes the fighter jet experience.

888Poker´s SNAP poker might have been one of the last fast-fold poker games to arrive on the scene, but it is definitely one of the better versions of the game, and has been favourably compared to PokerStars´ Zoom Poker and Full Tilt´s Rush Poker.

The new SNAP poker tournaments run in the same way as regular SNAP cash tables – allowing players to fast-fold their hands and be instantly whisked away to another table where they are dealt a new opening hand – only that players start with a selected number of chips and their tournament lives expire once the chips are gone.

Qualifying for the Extreme $5,000 Freerolls

New players and existing players are automatically credited with two free tickets for the twice daily Extreme $5,000 freeroll tournaments, but extra tickets can be earned by completing daily cash challenges or tournament challenges – such as playing twenty raked hands of SNAP poker or competing in x number of SNAP tournament with a minimum buy-in – or making a deposit into 888Poker.

In addition to the two Extreme $5,000 freeroll tickets awarded to new players for simply downloading the software and registering an account, five more entries will be awarded when the player makes their first deposit of more than $20.00 (or currency equivalent). There is no limit to the number of daily freerolls players can compete in, provided that they have earned their entry tickets through the daily challenges.

Players who win tickets into the four Wednesday Fighter Jet Flight Freerolls (each Wednesday up until 21st May) are playing for just the one prize in each weekly final – a superb Fighter Jet Flight Package which includes an L-39 Albatross Fighter Jet flight, 2 nights in a 5-star Prague Hotel (including breakfast if you think you can keep it down), return flights to Prague, two 888Poker group dinners and some 888Poker goodies.

The full terms and conditions of the fighter jet promotion can be found on the 888Poker website, but players should be aware that SNAP poker can only be played on PCs with Windows software or via the 888Poker mobile app. SNAP poker is not available on the Instant Play Flash version of the software or on Mac software running a Windows emulator.