The World Poker Tour PR machine got into top gear yesterday to spin a venture between the WPT and DSPT supposed to replace their National and Regional Events. 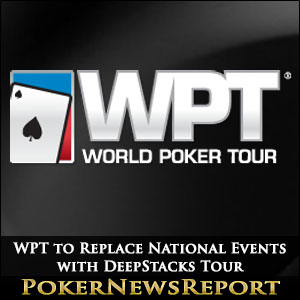 The World Poker Tour PR machine got into top gear yesterday to spin a venture between the WPT and DSPT supposed to replace their National and Regional Events.

For four years the two mini-series have often formed a significant part of local poker festivals and gained the appreciation of players who participate in them because of the WPT´s professional organisation and execution. Now – according to the PR coming out of WPT Towers – the WPT feel that a change is appropriate, and it has formed a (one-sided) partnership with the DeepStacks Poker Tour to (allegedly) replace their National and Regional Events with WPTDeepStacks.

Looking at the tournament schedules of the (former) DeepStacks Poker Tour and the WPT National/Regional Events, all that seems to have happened with this joint venture is that a WPT label has been stuck on the existing DSPT calendar, with a couple of events scheduled for London in October and Malta in November.

The current schedule of WPT National and Regional Events have undergone no form of rebranding and, according to the spin coming out of WPT Towers, the (former) Deepstacks Poker Tour schedules will now include live satellites to WPT Events, while the new WPTDeepStacks series will offer a seat in the 2015 WPT World Championship for the Player of the Year.

Pliska Ought to Get Out More

According to the WPT´s press release, the cutting edge approach of slapping a WPT label on the existing DeepStacks Poker Tour will be a win-win-win situation for poker players everywhere; and WPT President Adam Pliska admitted that he couldn’t be more excited about it – which suggests he ought to get out more!

DSPT President Chris Torina was at least a little more honest about the partnership between the two companies. He said that the WPTDeepStacks Poker Tour would deliver a world class experience for players with a bankroll to support low to medium buy-ins at a fraction of the cost of the full WPT Main Events. Then he also dumped his credibility by stating that the partnership was a game-changer.

This latest PR faux pas comes on the back of the announcement that the WPT will be hosting a $500.00 + $65.00 buy-in tournament at the Aria Casino in Las Vegas slap bang in the middle of the World Series of Poker. The event is scheduled to take place between the 1st and 6th July – at the same time at the Little One for One Drop, the 6-Max Ten Game Event and the first two opening flights of the Main Event – and the WPT hopes to attract players to the Aria 500 with a $1 million guaranteed prize pool, from which the winner will walk away with $200,000.

The WPT is praying that more players will try to qualify online for this event than they did for the WPT World Championships – which failed to meet its $5 million guarantee last week despite being hosted in the PartyPoker/WPT stronghold of the Borgata Casino – and, to encourage players to include the Aria 500 on their Las Vegas schedule this July, the WPT gave away seats to the eighteen players who made Day 4 of the World Champions and are funding live satellites at the Aria throughout June with 100 seats into the target event guaranteed.