Side Events at WSOPE Get Underway Today

The World Series of Poker Europe gets underway today, with the first of fifty-four scheduled tournaments being the Ladies €1,100 buy-in NL Hold´em Event. 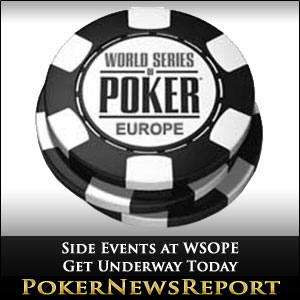 The World Series of Poker Europe gets underway today, with the first of fifty-four scheduled tournaments being the Ladies €1,100 buy-in NL Hold´em Event.

Much of the poker world´s attention may currently be distracted by the European Poker Tour taking place in London, but an even larger poker series gets underway today at the 100-year-old Casino Barriere in Enghien-les-Bains near Paris.

Eight gold WSOP bracelets will be up for grabs over the next two weeks – the feature events being the €10,450 buy-in Main Event which starts on Saturday October 19th, and the €25,800 High-Rollers Event which gets under way on Tuesday October 22nd.

Last year´s WSOPE was probably the best ever. Wins for Antonio Esfandiari and Roger Hairabedian in the warm-up events were eclipsed by Phil Hellmuth´s victory in the WSOPE Main Event to collect his thirteenth WSOP bracelet.

This year´s event promises to attract the stars of the poker world once again, but the move to Paris from Cannes could well price out many players with lesser bankrolls, who are usually able to pick up some cheap out-of-season accommodation and eat fairly well on a budget.

The choice of the Casino Barriere to host the WSOPE has been made for financial reasons – with the casino being adjacent to a 500-seat theatre in which the organisers plan to host and televise the final tables of each event – and also so that the WSOP can distance itself from the controversial Partouche family. However, the move itself is also controversial.

Controversial Move to Paris Could Backfire

After hosting the WSOPE in Cannes for six years, the decision to move the event to Paris has been sold to players on the grounds that “this location promises to be the most comfortable and conducive set up for poker players” (WSOP Executive Director Ty Stewart).

However, players stepping outside of the luxury casino complex will find it situated in one of the roughest suburbs of Paris; 15Km from any form of entertainment and a €25.00 taxi fare into the city centre – not that expensive, but more than the cost of a ten-minute walk for players who have been playing EPT London and staying in one of their recommended hotels.

Furthermore, players more accustomed to the Mediterranean climate of Cannes (where there are currently clear blue skies and temperatures of 19ºC/63ºF) will find the weather in Paris gloomy – much like the people who live there – with temperatures getting no higher than 11ºC/52ºF during the day.

For players who are content to remain in the casino complex, these are the dates when the bracelet events will be played in the WSOPE.