Antonio “The Magician” Esfandiari´s victory in the €1,100 buy-in WSOPE Event #2 enabled him to take the lead in the race to be WSOP Player of the Year. 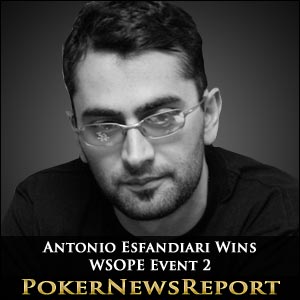 Antonio “The Magician” Esfandiari´s victory in the €1,100 buy-in WSOPE Event #2 enabled him to take the lead in the race to be WSOP Player of the Year.

Esfandiari captured his second WSOP bracelet of 2012 and became only the third player ever to win WSOP title tournaments in the States and in Europe in the same year after J.P. Kelly (2008) and Jesper Hougaard (2009). Despite facing a stiff final table, Esfandiari recovered from losing a substantial portion of his chips mid-way through the day to battle back when the final table became short-handed.

As the third and final Day of WSOPE #2 started, Esfandiari (264,000 chips) was in a healthy position on the tails of chip leader, Antonin Teisseire (269,500 chips). Thirteen other players remained in the field – many of them local to Cannes and each eager to become the first French player to win a WSOP bracelet on home soil – and to begin with, a French victory looked a distinct possibility.

First Antonin Teisseire extended his lead with the elimination of Casey Kastle (A♣ 9♣ > K♣ Q♦) and Anthony Pons eliminated his compatriot Amaury Detoc (A♠ K♦ > K♠ Q♣) before Jamel Haddad removed the first of five US poker players when his A♥ 6♠ paired both cards to best W. J. Vincent´s K♥ K♦. Remi Bollengier kept up the assault on the Americans when his pocket Aces held against Joe Kuether´s A♣ 4♠ and Jamel Haddad was responsible for eliminating the sole Latvian when his 5♣ 4♦ shove from the small blind was called by Igor Kalinicenko (A♠ K♥) and then made a full house Fours full of Queens.

… and then Quickly Retreat!

As the players combined on one table, the luck of the French began to peter out. First Anthony Pons was eliminated when his shove with A♥ Q♥ was called by Salvatore Bonavena – with the Italian´s 8♥ 8♣ holding – Florian Ciuro was eliminated by Remi Bollengier when his K♥ Q♣ could not come from behind to best Bollengier´s A♠ J♣ and then Bonavena once more was responsible for busting a citizen of France when his Q♣ Q♠ held against Jamel Haddad´s A♠ 3♠.

Around the same time, Antonio Esfandiari´s luck began to change for the better. Having lost a third of his chips after doubling up McLean Karr (A♣ 9♦ > Q♣ J♥), the “Magician” stole a big pot from Karr and Ashly Butler. After Butler had been eliminated in seventh (A♥ 8♣ < 10♠ 10♣ of Remi Bollengier) Esfandiari got his revenge on Karr when his A♠ 8♣ held against Karr´s Q♥ 10♠. He then captured a 400,000 pot against Remi Bollengier with a post-flop shove and, entering Level 21 (blinds 6K/12K – ante 1,000), Esfandiari had built up a substantial lead over the remaining four opponents.

Three quick eliminations in the space of fifteen minutes “set” the heads-up. First, Remi Bollengier (J♥ J♠) called Valentin Detoc´s shove with 3♥ 3♦ and saw the J♣ dealt first on the flop. Bollengier was then responsible for the departure of Antonin Teisseire when his pair of Tens also made a set on the flop to beat Teisseire´s A♦ 6♠, and then Esfandiari hit a set of Sixes on the flop to eliminate Salvatore Bonavena (A♥ J♣) in third and take a 1,075,000 -v- 810,000 chip advantage into the heads-up.

With so much at stake, the heads-up started nervously. Not one hand went to showdown with the first hour, and the only major chip movement was when Esfandiari captured a 400,000 chip pot with third-best pair against Bollengier´s bluff. Bollengier got most of his chips back when coming from behind to river a straight against Esfandiari´s flopped pair of Kings, but it was all over fifteen minutes later when Bollengier called Esfandiari´s river shove on a board of 10♣ 8♠ A♠ / Q♦ / 4♦.

Esfandiari Races to Front of POY

With his victory added to his One Drop success three months ago, in addition to collecting his second WSOP bracelet of the year and €126,207 in prize money, Esfandiari also took the lead in the WSOP Player of the Year race ahead of Greg Merson – who is in Cannes competing in the WSOPE, but who still has a place at the final table of the WSOP Main Event to look forward to.