Lucky for Some! Hellmuth Wins 13th Bracelet at WSOPE

Phil Hellmuth captured his thirteenth World Series of Poker bracelet in the WSOPE Cannes Main Event – enjoying plenty of good fortune as he did so. 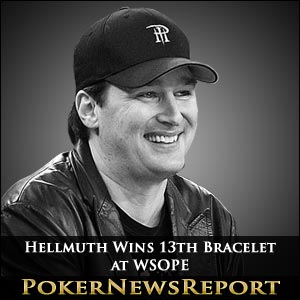 Phil Hellmuth captured his thirteenth World Series of Poker bracelet in the WSOPE Cannes Main Event – enjoying plenty of good fortune as he did so.

It´s the best tournament I have ever played in my life said Hellmuth after recovering from a typical Poker Brat meltdown to bust Sergii Baranov in the Heads-Up. I am as high as akita (a kite) right now he tweeted to all his followers who had been watching every hand on TV or following the live text updates on the WSOP web site.

Hellmuth´s followers were equally excited by his victory, with the manner of his success perfectly summed up by top UK poker player Praz Bansi – congrats to phil hellmuth on winning the wsope main event in cannes, you´re a huge wally sometimes but definitely good for the game..

Day 5 of the WSOPE Main Event was a dysfunctional day – and not just due to Phil Hellmuth´s presence! Because of television commitments, it had been agreed that play would cease when the table became four-handed and re-commenced at 9.45pm local time and, as the players took their seats just before 2.00pm local time on the final day of the WSOPE, the various chip stacks looked like this:-

The first hour of play (Level 23 – blinds 12K/24K ante 4K) was mostly unremarkable with the exception of Chris Brammer´s A♦ K♥ shove against Joseph Cheong (A♥ K♠). The pot was chopped and, although Joseph Cheong took a few small pots from Hellmuth, Baranov and Girault, the order of the leaderboard remained the same. However, at the start of Level 24 (blinds 15K/30K ante 5K), the tournament finale exploded into life.

Jason Mercier had successfully picked up some valuable blinds and antes with his first shove but, when he tried it a second time with A♦ Q♣, was called by Sergii Baranov who had been dealt A♥ K♣. Mercier bust in eighth.

Two hands later, Phil Hellmuth correctly forecast that he had a good feeling about this one when calling Stephane Girault´s A♥ J♥ shove with his 5♥ 5♣ despite Girault catching an Ace on the flop. Hellmuth hit a runner-runner straight and Girault was out in seventh.

In the next hand, Paul Tedeschi thought he had found a spot to put all his chips in with A♦ J♦, but ran into Joseph Cheong´s Q♣ Q♥. Whereas pocket Queens had been bitches for anybody dealt them on Wednesday, Cheong´s Queens held up on this occasion and Tedeschi was gone in sixth.

Chris Brammer was almost gone in the next hand, but he spiked a heart to complete a flush against Phil Hellmuth to double up. His reprieve did not last long however, as he was first crippled by Stephane Albertini – who ironically spiked a heart on the river to complete a flush draw – and then failed to catch a card when getting the last of his chips in with A♥ J♥ – being eliminated by Sergii Baranov´s (K♣ 10♣) paired ten. Brammer eliminated in fifth.

With four players eliminated so quickly and in such dramatic fashion, play was halted for four hours until the TV coverage was due to start. Once the fall-out from Level 24 had settled, Phil Hellmuth – who had also won valuable hands against Joseph Cheong and Sergii Baranov – emerged as the chip leader.

The resumption of play created more fireworks as Sergii Baranov was very close to putting Phil Hellmuth on a Mizrachi-esque tilt. Having already out-bet Hellmuth in the first hand back, Baranov then rivered a pair of Jacks to take 400,000 chips from the chip leader, took another million when he hit the 9♦ to pair his hand against Hellmuth´s smaller flopped pair and took almost a million more when both players turned a straight – but the Q♣ on the river gave Baranov a flush.

OH MY GOD IN HEAVEN! yelled Hellmuth, as he leapt up from his seat, curled up in a ball on the floor and appealed to his creator God how does he get these miracles?! Inasmuch as the rail found Hellmuth´s antics amusing, within 45 minutes Hellmuth´s stack had been depleted to 2,815,000 chips and Sergii Baranov now had a commanding lead.

Within three hands of Level 26 starting, Hellmuth was back in front. First he hit 4♣ on the turn to match the 4♠ 4♥ in his hand a take a million chips from Joseph Cheong. He then got his revenge on Baranov (paired A♥ on the flop) with 7♠ 3♠ – hitting 3♦ on the turn and 7♣ on the river! – and took another million off the Russian when calling Baranov´s audacious river bluff.

Baranov´s chip stack caught up with Hellmuth´s when he caught a flush to eliminate Joseph Cheong in fourth (K♦ Q♦ > A♠ Q♣), but Hellmuth´s heavenly help had not finished its work. Another million chips went in Hellmuth´s direction after he rivered the 2♥ to give him trip Deuces and best Baranov´s flopped pair of Jacks and then he hit a two outer 7♥ on the river to make a set of Sevens and eliminate Stephane Albertini (J♦ J♥) in third.

Going into the Heads-Up, Phil Hellmuth had built a 9,575,000 -v- 3,025,000 chip advantage. Any hopes that Sergii Baranov had of making a comeback were dashed when Hellmuth made major post flop bets to force the Russian into big folds. With his chip stack getting smaller with each hand, Baranov picked the wrong moment to shove his last two million chips with A♠ 4♣ as the Gods were still smiling down on Phil Hellmuth. I´m going to win this right here predicted Hellmuth as he rolled over A♥ 10♦, and he was right.

The A♦ on the turn paired both players and gave Baranov the hope of a chop, but the 3♣ was of no help to the Russian and Phil Hellmuth was the WSOPE Main Event champion, with another €1,022,036 to add to his impressive life-time record (over $18 million) and the lead in the WSOP Player of the Year leaderboard – and his thirteenth WSOP bracelet. Lucky for some!

420 players ponied up the €10,450 buy-in or qualified for the Main Event on the barrier.fr web site (like Stephane Albertini did!), creating a prize pool of €432,000 which was shared among the top 48 players- Those picking up the lion´s share of the winnings were:-