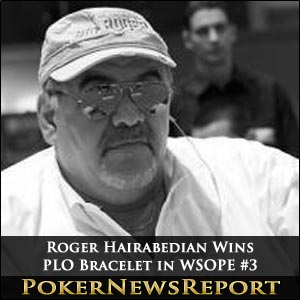 Hairabedian and Mattila had clashed several times during Day 2 of the €5,300 buy-in event – with both having the opportunity to eliminate the other before the bubble – so it was only fitting that the conclusion of the event should be fought out between the two after both players had overcome a field of international stars to get to the climax of WSOPE Event 3.

Indeed, as Day 3 started, several of those international stars were still in contention for the title. The nine players seated around the final table had between them won 6 World Series of Poker bracelets, 5 World Poker Tour Main Events and 8 European Poker Tour titles – plus quadzillions of dollars in prize money. Roger Hairabedian enjoyed a lucrative Day 2 (eventually) to hold the chip lead as play began but, as anybody who has played PLO will know, things can change quickly once the cards are in the air.

The early action was fast and furious with Michael Mizrachi involved in many of the hands and taking the chip lead from Roger Hairabedian after forcing the Frenchman out of an 87,000 chip pot. Mizrachi was also involved in the hand which saw the elimination of Jason Mercier in ninth. On a board on 9♥ 9♠ 9♦ / 10♠ / 8♦ Mizrachi checked after the river, but Jussi Nevalinna raised the 100,000 chip pot a further 60,000. Mercier called of his last 58,500 chips but Mizrachi folded. Nevalinna turned over the 9♣ for Quad Nines, while Mercier revealed 10♥ 10♣ for a Full House Tens over Nines.

Michael Mizrachi extended his chip lead when coming from behind to river a straight and eliminate Michael Schwartz in eighth, but his habit of playing as many hands as possible soon got him into trouble. Roger Hairabedian, Joe Hachem and Jussi Nevanlinna all took big chunks out of the Player´s Champion, before Mizrachi rivered a full house to best Nevanlinna´s Ace Flush and re-capture the lead. Ville Mattila, who had a quiet game until this point, then stormed into the lead in the hand which saw the departure of Michael Abecassis in seventh.

Michael Abecassis Busted in Pot of the Day

With blinds of 3K/6K, Mizrachi had raised to 11,000 and Ville Mattila called. Abecassis moved all-in from the small blind for his last 48,500 chips, which Mizrachi called but Mattila raised to 199,000 chips. Mizrachi called and, after the flop of 10♣ 2♠ J♥, moved all-in himself. Mattila, with only 89,500 chips remaining made the call and the players revealed their hands.

The turn card A♦ enabled Mattila to make a set of Aces, while the 8♥ on the river gave both the other two players two pairs. Abecassis was eliminated, while Mizrachi took a 300,000 chip hit and Ville Mattila soared to the top of the tournament leaderboard.

Four Bust Within the Hour

Mizrachi got himself back into the game by doubling up against Ville Mattila in a hand soon after; and again against Roger Hairabedian following Joe Hachem´s elimination in sixth at the hands of Mattila. Mizrachi then rivered another straight to bust Jussi Nevanlinna in fifth, before Roger Hairabedian was gifted a pot by Jussi Ryynanen´s failed bluff to reduce the field to just three players. However Mizrachi´s good fortune deserted him in his final hand of the tournament against Roger Hairabedian.

On a flop of 7♠ 7♣ 3♠, Mizrachi raised the pot to 16,000. Hairabedian raised to 64,000 and Mizrachi moved all-in. “I have a full house” he declared when peeling over 2♦ 3♦ 3♥ 5♦ and looked pretty satisfied as Hairabedian revealed 5♥ 5♣ 7♦ 8♣ for trip Sevens. However, the 8♦ on the turn gave Hairabedian a better full house and the one-outer (3♣) that Mizrachi needed to win the hand failed to be dealt on the river. Mizrachi was out in third place and we were into the Heads-Up.

With the elimination of Michael Mizrachi, Roger Hairabedian had built a significant chip lead over Ville Mattila (981,000 -v- 484,000) and it was one he was never going to relinquish. Despite Mattila chipping away at Hairabedian´s stack, the Frenchman refrained from his accustomed aggressive betting tendencies to play a patient game.

As level 22 started (blinds 8K/16K) Hairabedian eventually produced his “A” game (“A” for aggression) and built his chip stack up to 1.2 million. Mattila was folding hand after hand and it was inevitable that there had to be a call at some stage before he was simply chipped out. Unfortunately for the Finn, he picked the wrong moment to turn aggressor and get all his chips on the table.

Hairabedian led the pre-flop action by betting 38,000 chips, which Matilla called. Following the flop of 7♥ 9♣ 6♣ Mattila led out for 35,000 chips more and then got his last 40,000 chips into the pot following the K♣ turn. Hairabedian called and revealed 5♣ 2♣ K♠ 3♥ for a club flush, while Mattila could only produce K♥ 6♠ A♥ 2♦ for two pair. The 7♠ was not the card Mattila was looking for on the river and Roger Hairabedian became the first French winner of a WSOPE bracelet.

97 players entered the WSOPE Pot Limit Omaha Championship, creating a prize pool of €475,300 which was shared by the top 12 players. After collecting his winner´s cheque for €142,590 Hairabedian revealed that he was unaware he was the first French winner of a WSOPE bracelet “I am first? For one time I’m first in something! I am very happy to represent France in this WSOP because Barriere is making this a big event. Now it’s the biggest event in Europe and it is good that a French man won a bracelet”.