For the second time in a row, the EPO Main Event winner has come from “overseas” after Mickey Petersen beat Chris Bjorin to become English Poker Open Champion. 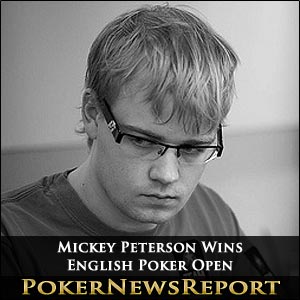 For the second time in a row, the EPO Main Event winner has come from “overseas” after Mickey Petersen beat Chris Bjorin to become English Poker Open Champion.

The highlight of the two-week long London Poker Festival was the English Poker Open at the Fox Club in London´s Shaftesbury Avenue. Fitting snugly between the British Poker Awards and the GUKPT London, the event was well attended by the cream of English poker including award winners Sam Trickett and Neil Channing, EPT San Remo winner Liv Boeree, recent London Unibet Open winner Pratik Ghatge and Surindar Sunar – whose first cash in a London Poker Festival event came in 1991!

Haque busted out before the money on Day 2, but Day 1A chip leader Igor Kurganov crept onto the final table behind the man responsible for cracking Sam Trickett´s Aces with a set of Twos – Jamie Roberts. When the final table began, the chip counts were as follow:-

Despite the well-stacked table, the eliminations happened thick and fast. The table was quickly reduced to six with the early departures of Igor Kurganov, Thomas Laumier (J♠ 8♠ < K♦ Q♦ Surindar Sunar) and Niels Ladefoged (K♣ J♣ < J♥ J♦ Jamie Roberts) and, after Ben Jackson shoved his A♥ 5♥ into the pocket Aces of Chris Bjorin, the table was down to five by the dinner break with Jamie Roberts in an even stronger position than he had started the day.

Lategano was the first player to depart after dinner, chasing a gutshot draw which never materialised against Mickey Petersen´s pocket Queens, but as the play became four-handed and the blinds increased, the speed of the game slowed considerably. The experience of Sunar, Bjorin and Petersen enabled them to dig into the chip stack of Jamie Roberts – who nonetheless was unlucky to be eliminated by Mickey Petersen´s A♠ 10♥ shove when holding A♦ K♦ – Petersen connecting with the 9♣ 8♥ A♥ / 10♣ / Q♦ board for two pairs.

Chris Bjorin paired an Ace in his hand to eliminate Surindar Sunar in third, but went into the heads-up with a significant chip disadvantage – 610,000 -v- 2,780,000. Despite doubling up twice, Bjorin was always struggling, and when he called Petersen´s 9♣ 9♥ shove with A♠ K♣ – and failed to connect – the tournament was over. It just came down to the cards and it was my day said a modest Petersen after the event, but nobody would begrudge the online king of the virtual felt his second major live victory after taking down the EPT Copenhagen in February this year.