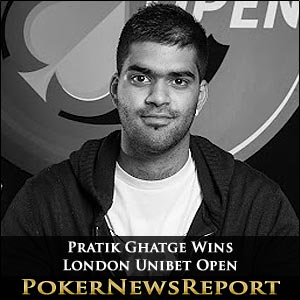 Ghatge attributed his win in the London Unibet Poker Open to patience – commenting on the fact that, although he had won several major poker tour side events in the past, victory in a Main Event had always eluded him. “Good things come to those who wait” he said after taking the £85,050 first prize at Aspers Casino in Stratford on Sunday.

Whether or not patience is a virtue in poker, it certainly paid dividends for Ghatge. Looking destined for nothing better than a small cash on Saturday, Ghatge had doubled up against Gavin Eley and then bust Roberto Scrinzi in quick succession and entered the final table of the Unibet Open Main Event in third place behind 2010 winner of the event Paul Valkenburg.

Marc Inizan was the first player to make a significant move on the final day. Busting out Sander Hart in ninth (A♦ Q♦ > A♣ 7♠) and Darius Charski in eighth (7♦ 7♥ > 8♣ 9♣), Inizan was soon over 1.2 million chips. Pratik Ghatge was also involved in the action, but after eliminating Pyry Kekalainen in seventh (A♦ K♥ > Q♥ J♥) laid down a big hand (A♣ Q♦ – Ace paired) against Paul Valkenburg´s rivered flush.

Ghatge got his chips back with interest when busting Marc Inizan in sixth (K♦ K♠ > A♣ K♣) and then took a massive chip lead when coming from behind with 8♣ 8♠ on a flop of 10♥ J♠ K♣ against Piotr Jaworski (A♥ K♠) to hit the 8♦ on the turn and go to 2.6 million chips. Soon it was to be a UK 1-2, as Gavin Eley (who only entered the tournament after sharing Aspers´ £150,000 Bad Beat Jackpot in a £1.00 cash game on Tuesday) rivered a diamond flush to double up against Paul Valkenburg.

Valkenburg was the next player to depart the table – an audacious bluff with J♥ Q♥ on a board of A♦ 10♦ 5♠ failing against Pratik Ghatge´s K♦ 10♣ – and, after Tomasz Kozub had more than doubled up in a three-handed pot which could have signaled the end of the game (had Ghatge not folded before the river), Gavin Eley pushed once too often with suited connectors (7♦ 8♦) and was busted by Kozub´s K♠ Q♦ – the King pairing on the flop.

An intriguing heads-up lasted more than an hour. Ghatge had gone into the climax of the event with a 4.1 million to 2.1 million chip advantage and quickly extended that to 5.2 million to 1 million when forcing Kozub out of a pot Kozub would have won had he called. Although Kozub was able to get one double-up in with A♠ A♥, a second attempt with Q♦ 10♣ found Ghatge holding A♥ 7♥ and with Kozub failing to improve his hand, Pratik Ghatge took down his first major tournament Main Event.

The Unibet Poker Open was the highlight of week one of the London Poker Festival and there are plenty more goodies to come. Tonight (Monday), the British Poker Awards are hosted aboard the HMS President on the Embankment, while the £2,000 English Poker Open starts tomorrow at the Fox Club in Shaftesbury Avenue and on Thursday London GUKPT Main Event kicks off at the Vic on the Edgware Road.