The EPT may have moved to March and the WSOPE to Cannes, but organisers of the London Poker Tour can still put on a show to rival the Olympics (well, nearly!) 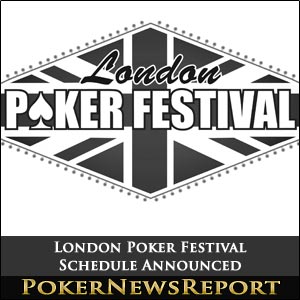 The EPT may have moved to March and the WSOPE to Cannes, but organisers of the London Poker Tour can still put on a show to rival the Olympics (well, nearly!)

Details of the London Poker Festival in September have just been announced by the event´s organisers and, like the Olympics, there are plenty of events, multiple venues and the London Underground to negotiate. Like the Olympics, it may take years of dedication before you succeed in any of the events but – unlike the Olympics – lardy blokes can participate, girls can play in the same games as boys, and you don´t get disqualified for taking an illegal substance the night before an event.

So far, 80 events have been confirmed offering more than £1 million in guaranteed prize money and each of the participating casinos will be hosting cash games throughout September to compliment the feature events in the London Poker Festival. The full schedule is available at londonpokerfestival.com but we have listed some of the highlights below. It is recommended that players contact the individual venues to request details of registration and membership requirements.

In addition to the poker and the parties, Backgammon, Casino and Bingo tournaments will also be hosted at various venues – there is even going to be a “Coin-Flip” tournament (Friday Sept 14th at Aspers) where the winner in a best-of-three toss of a coin progresses into the next round.

The London Poker Festival is a unique celebration of the London poker community, which is the best in the world. By putting on this very special schedule of events, we want to give something back to the poker community while at the same time positioning London as a major poker destination to the rest of the world.