Your Vote Counts at the British Poker Awards

The British Poker Awards are upon us again, and this year the poker playing public are being asked to cast their votes in eight different categories. 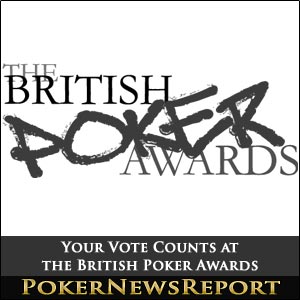 The British Poker Awards are upon us again, and this year the poker playing public are being asked to cast their votes in eight different categories.

After two successful years at Poker in the Park, the British Poker Awards are going to sea in 2012 – well, the river. This year´s event is being hosted aboard the HMS President which is docked on the Embankment in the City of London and promises to be a night to remember.

Guests attending the event on Monday 17th September will be invited to a VIP cocktail reception with the nominated players, a night of music and entertainment and – of course – the star-studded British Poker Awards ceremony.

For those unable to attend the event (tickets cost £21.80 from Eventbrite) who would like to have their say in the outcome of the awards, online voting in eight different categories is available at www.thebritishpokerawards.com with the categories being as follow:-

Won in 2010 by Neil Channing and in 2011 by Sam Trickett, this first award of the night could spark a Sam Trickett landslide. The Nottingham player´s exploits in high-stakes cash games in Macau are well chronicled, although he may face opposition from Alexander Millar who, under the name of “Kanu7” recently took on Viktor Blom in a PokerStars Superstar Showdown. The three other players nominated for the award – Ben Grundy, Fred Ogillvie and Andrew Moseley – all have strong credentials of their own, but the award of Best Cash Player is probably going to be adorning Sam Trickett´s mantelpiece by Tuesday morning.

James Akenhead and Jake Cody are the previous winners of this prestigious award – possibly due to their exploits at the World Series of Poker. All five nominees for the 2012 award were in Las Vegas during the summer to remove as many of those Yankee dollars from the grubby little hands of the natives as possible and, if the result of this award was based on who achieved it most frequently, JP Kelly would be enjoying a walk. However, many British poker fans will remember Sam Trickett´s second place in the “One Drop” for $10 million more than any other WSOP event and we believe that he will be making space on his mantelpiece for this award as well.

Chris Moorman goes for a hat-trick of wins in this event, having won the award for Best Online Player in 2010 and 2011, however he might find that his affiliation with Lock Poker has removed him from the centre of attention as far as British online poker players (and voters for this award) are concerned. We would love to see young Matt Frankland win this award but, as his mum won´t let him stay out late enough to collect the award, we feel that British voters will show their appreciation of Ross “RLOG” Loggie – who coincidently had a very similar introduction to online poker as Chris Moorman. Spooky!

Each of these forums deserves an award for the contribution they make to British Poker and for banning Daniel Negreanu from their site (Interesting that last year´s winners 2+2 still allow D-Negs to post and they are not included in this year´s line-up). 2010 winners – The Hendon Mob – will be strongly represented once again, but we believe the battle for the award of Best Poker Forum in 2012 will be fought between the Blondes and the Black Belts – with the Black Belts coming on top of the Blondes (There´s an image!).

A new category for 2012 – and only four of the nominees for Best UK Tournament hosted at the Dusk til Dawn Poker Club in Nottingham! Each of these tournaments is worthy of recognition, but the work done by Des Duffy and the team at APAT to encourage more live poker at grass roots level surely deserves the award for Best UK Poker Tournament – unless you think differently.

This award is an amalgamation of two separate awards last year won by Neil Channing (Best Blogger) and Victoria Coren (Best Social Media). Like Chris Moorman, both nominees are on for a hat-trick of awards having respectively been voted Best Cash Player (didn´t Neil Channing look young in 2010?!) and Best Contribution to Poker in 2010. But it is about time that Tony Kendall won an award and his inclusion in the list of nominees is probably due to his “Viva Las Vegas” series for Sky Poker which was simply awesome. Tony frequently uses YouTube and Twitter to promote British poker and – despite the respective literary merits of his co-nominees – should walk away with this award standing on his hands.

Poker Personality of the Year

Kara Scott swept away the opposition for this award in 2011 (Happy Birthday btw) but may face a higher level of competition this year from the PokerStars Pros – Boeree and Coren. Andrew Feldman´s 2012 has been “chequered” to say the least and, with the female vote split three ways, we reckon we could see Neil Channing deservedly collecting the plaque for British Poker Personality of the Year.

The final two categories at the British Poker Awards – “Player of the Year” and “International Player of the Year” – are decided by a judging panel comprised of the sponsors for the event. Previous winners of these awards were Jake Cody and Jason Mercier in 2011, and Praz Bansi and Phil Ivey in 2010. We are looking forward to seeing Sam Trickett and Phil Helmuth collect their awards this year, or could it be somebody else? We will not know until September 17th!

Make your vote count by heading over to www.thebritishpokerawards.com and don´t forget to watch the video of the 2010 award ceremony to see how young Neil Channing looked two years ago!