Denmark’s Mickey Petersen secured the top prize for defeating Pierre Neuville in their heads-up battle in the DKK37,250 buy-in main event at the EPT Copenhagen. 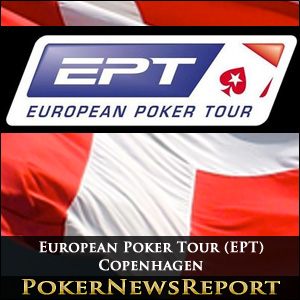 Denmark’s Mickey Petersen secured the top prize of DKK2,515,000 – or about $453,196 – for defeating fellow PokerStars pro Pierre Neuville in their heads-up battle in the DKK37,250 buy-in main event at the European Poker Tour (EPT) Copenhagen.

Home favourite Petersen – a Team PokerStars Online Pro – emerged victorious for his first major live event success from a 299-player field at Casino Copenhagen when seeing off veteran Belgian Team PokerStars Pro Neuville in what was a six-hour clash of internet sensations.

Incredibly, the eight-handed final table only included one player over the age of 30 – and that was 69-year-old runner-up Neuville.

Unfortunately, after what had been a thrilling tournament, the head-to-head clash of Petersen – who is known on PokerStars as ‘mement_mori’ – and Neuville, or ‘Zoutechamp’ at the poker room, failed to maintain that level of excitement when facing off against each other as their protracted battle fell flat.

The younger Petersen – who has earned over $4.6 million from online poker – looked fresh after six days’ play as he took control of the heads-up, while the older Neuville appeared fatigued and unable to force his game on his fellow online star.

However, the Belgian refused to give in easily, showing great patience to allow his chips stack to regularly drop under 10 big blinds, before moving all-in with premium hole cards to double-up and stay alive.

But this became more than a little monotonous, so all concerned – including Neuville, I’m sure – were delighted to finally see the last hand played out during level 31 when the blinds were at 60,000 and 120,000 with 10,000 antes.

The 22-year-old from Copenhagen was ultimately able to induce an all-in call from Neuville that saw Petersen hold the dominating Ac-5h against the Ad-4s of the Belgian.

Still, most railbirds – as well as both players – were anticipating a chop, especially when the flop provided Kc-Jc-6h for three overcards.

However, the turn 3s kept Peterson ahead, while the 5d on the river gave the Dane a pair of fives for the EPT title a huge cash prize. Neuville left with DKK1,600,000 for his runner-up finish.

Thankfully, the final table wasn’t such a pedestrian affair as the last day’s initial chip leader, Ravn – who took sixth place in the 2010 PokerStars Caribbean Adventure (PCA) main event for $450,000 – began with a healthy 2,458,000 in chips.

And, unlike the heads-up anti-climax, the final table was full of non-stop action as the eighth-placed finisher arrived before the day’s first level was completed.

Spencer Hudson Out in Eighth Place

The unfortunate victim was Texan Hudson – a PokerStars Sunday Million winner from 2010 – after his Jc-Js encountered Ravn’s As-10d.

The Mexico-based American – who moved south following the events of Black Friday last April – stayed in front following a flop of 9s-5d-2d, only for Ah to fall on the turn and hand the Norwegian chip leader the knockout.

The next elimination for Ravn arrived during level 24 – with the blinds at 12,000/24,000 and a 3,000 ante – when he this time led from the front when sending the other States final table qualifier, Pennsylvania’s O’Dwyer, to the rail in seventh place.

Ravn’s Ah-Js stayed ahead of the Ad-3d of O’Dwyer – who only recently relocated to Ireland to continue his online poker career – to extend the Narvik native’s chip lead still further.

However, PokerStars qualifier Van Alphen was soon quietly creeping closer as he doubled-up with pocket aces and kings – before crashing down when encountering Neuville in yet another all-in heads-up showdown.

But Van Alphen – who earned $171,500 for his runner-up spot in last year’s World Championship of Online Poker (WCOOP) main event – then shoved all-in for his last 528,000, only for the Belgian to call with As-Kc.

It was all over for the Westkapelle native when a king arrived on the river to leave us with just five players.

Fifth place went to Copenhagen’s Rasmussen as the 28-year-old online high stakes cash game specialist first saw his chip stack demolished, then increased dramatically, before losing it all to Petersen.

Rasmussen – who has now cashed in four out of the five EPTs he has entered – gave up a huge chunk of his stack to Malta-based Dane Hansen after the former had called all-in on a board that read 10h-5h-5d-Ad.

The former law student had two pair as well as a flush draw from his 10d-9d hole cards, but was beaten by the Qh-Qs of Hansen, who moved closer to chip leaders Ravn and Petersen.

Meanwhile, Rasmussen had been chopped down to about 150,000 in chips – or five big blinds – but doubled-up twice through Hansen when winning with 8d-5h against his opponent’s Qh-Jc, and secondly when his As-10c faced Kd-6h.

However, his charge came to a crashing halt when once again all-in, this time against fellow Dane Petersen. Rasmussen showed 5c-5d for a coinflip against Petersen’s Kh-Qh.

The Jh-As-9h gave Petersen numerous outs and the 6h turn was just perfect for the now-dominant chip leader – who had earlier moved top when his trips beat Neuville – as it handed him the nut flush to send Rasmussen out in fifth place.

Petersen had managed to secure a 2 to 1 chip lead over Ravn and Hansen, to leave Neuville way back in fourth with just 12 big blinds.

Under pressure, the experienced former vice-president of board game company Hasbro was dealt some great cards to double-up with when his Kh-Kd became quads on the flop to beat out the Ac-10h held by Petersen.

Ravn was next out in fourth when the IT consultant moved all-in while holding Qc-Qd, to be called by Hansen, who showed Ad-Kh.

The 26-year-old seemed certain to double-up as the flop came 8d-5c-4s and the turn was the Js. However, he was hitting the rail moments later when the dealer laid down the As on the river to give Hansen top pair.

Pierre Neuville On the Charge

Neuville then began his move for the title, doubling-up through Petersen – who picked up $169,286 from finishing second at a $2,100 buy-in No-Limit Hold’em event at the 2010 PokerStars Spring Championship of Online Poker (SCOOP) – when the former’s 5d-5h beat the latter’s Ac-8h.

The old man at the table continued his rise during level 27 following a succession of massive pots that eventually led to Neuville taking over as chip leader with a big showdown that didn’t actually involve him.

This was perfect for Neuville, of course, as Petersen showed Qc-Qs to dominate Hansen’s Jd-Jc. The flop of Qd-9h-7c gave Petersen trip queens, while the 7h turn finished off Hansen, who left his seat to offer his congratulations to our heads-up duo as the unimportant Ad came on the river.

The Dane had secured a tiny chip lead of 4,400,000 against Neuville’s 4,000,000 as the heads-up marathon began that ultimately ended with a home victory, the top prize, an EPT trophy and a shimmering Shamballa bracelet for Petersen.

Danish soccer legend Jan Molby also secured 45th place for DKK55,000 for his opening cash from an open tournament and easily his biggest ever. The former star of Liverpool FC exited on the penultimate day when his ace-king was beaten out by the queens of Swede Michael Tureniec.

The EPT’s next stop is in the Casino Gran Madrid from March 12 to 17 – and you can be assured Poker News Report will be bringing you all the final table action.