The Stars Shine at the British Poker Awards

It was a good night for Sam Trickett, PokerStars and DTD at the British Poker Awards, with the three being connected with 10 of the 17 awards distributed 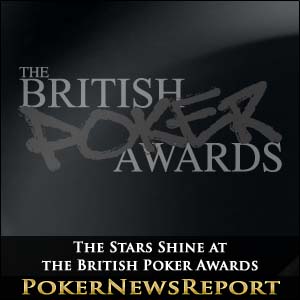 It was a good night for Sam Trickett, PokerStars and DTD at the British Poker Awards, with the three being connected with 10 of the 17 awards distributed.

The glittering event that is the British Poker Awards was hosted last night aboard HMS President at London´s Embankment as a prelude to the English Poker Open which starts today at the Fox Poker Club on London´s Shaftesbury Avenue. As widely predicted (by PokerNewsReport at least) Sam Trickett picked up three awards for Best Cash Player, Best Tournament Player and Player of the Year, but the involvement of PokerStars in British Poker was probably the stand-out feature of the evening.

PokerStars´ sponsored pros Liv Boeree and Vanessa Selbst captured the plaques for Poker Personality of the Year and International Player of the Year respectively, while Kirsty Thompson was acknowledged as the person who had contributed most to promoting poker in the UK courtesy of the UKIPT and her “baby” – the UKIPT Nottingham at Dusk till Dawn – won Best UK Tournament. PokerStars had one more prize to come – that of Best Tournament Director which was awarded to Toby Stone for his work on the EPT and UKIPT events.

Dusk till Dawn got in on the act by winning Best Card Room and Best Card Room Manager (Simon Trumper), while the bar at the Palm Beach Club and the restaurant at the Grosvenor Victoria Casino picked up awards for their beverage services. Chris Moorman (Best Online Player), Neil Channing (Best Blogger / Social Media) and Craig McCorkill (Breakthrough Player of the Year) were the other individuals to win awards as the Champions Poker League picked up the title of Best Poker League and the Hendon Mob triumphed in the race for Best Poker Forum.

Congratulations to all the winners!