The fourth leg of the Latin American Poker Tour (LAPT) got underway yesterday with the opening flight of the $1,550 + $150 buy-in LAPT Panama Main Event. 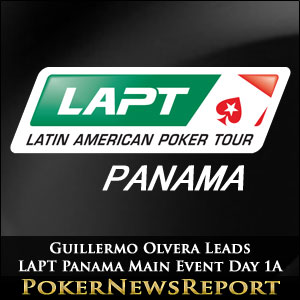 The fourth leg of the Latin American Poker Tour (LAPT) got underway yesterday with the opening flight of the $1,550 + $150 buy-in LAPT Panama Main Event.

The LAPT Panama Main Event is the highlight of a packed weekend at the Veneto Wyndham Grand Hotel and Casino in Panama City, and yesterday the first of two opening Main Event flights attracted a sizeable 174 entries.

Plenty of familiar faces joined the action and re-joined the action in this unlimited re-entry event and, after 10 one-hour levels of action, it was Mexican poker player Guillermo Olvera who bagged and tagged the most substantial chip stack.

Olvera is no stranger to Latin American success – having won the Punta Cana Poker Classic last November for $171,100 – but will have his work cut out to maintain his lead over several notable players including three PokerStars Team Pro players – Jose “Nacho” Barbero, Humberto Brenes and Leo Fernandez.

Barbero was the only one of the three Team Pro players to survive the first opening flight – finishing the day with a respectable 65,000 chips – while Brenes (who cashed ten times in the 2014 World Series of Poker) and Fernandez (who won this event in 2012) will be back at the tables later today to compete in Day 1B of the LAPT Panama Main Event.

Other Notable Names in the Field

Other notable names in the Day 1A field include Carter Gill – inaugural winner of the LSOP Millions in Panama in March – who bagged and tagged 55,200 chips after flopping two pairs to double-up against an opponent A♠ 9♠ > A♦ K♦ late in the day, and Michael Aron – who was one of the chip leaders after Day 2 of the 2014 WSOP Main Event before finishing in 80th place.

Jessica Borrego was the top performing female poker player of the opening day – bagging up 95,900 chips – and she will be accompanied on Friday´s Day 2 by Angelina Rich, who plays online as “ARichDesign”, has a victory in the PokerStars Women´s Sunday to her name and who qualified for the LAPT Panama Main Event via an FPP satellite on PokerStars.

Looking Ahead to Day 1B of the LAPT Panama Main Event

Day 1B of the LAPT Panama Main Event looks like it is going to be a busy one. Late registration and re-entry is open until the end of Level 7, so players who bust out on Day 1A have the opportunity to re-coup their losses – provided there are seats available!

Only fifty-eight players survived Day 1A of the tournament, and those who will be able to rest on their laurels – or play in one of the side events – include: