Phil Ivey dominated Day 2C of the 2014 WSOP Main Event and takes the overall chip advantage into Day 3, with just 1,500 players between him and WSOP glory. 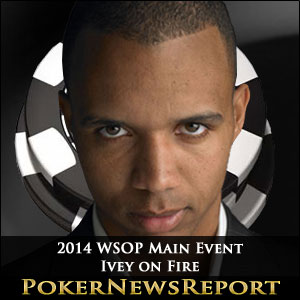 Phil Ivey dominated Day 2C of the 2014 WSOP Main Event and takes the overall chip advantage into Day 3, with just 1,500 players between him and WSOP glory.

Although there is still a long way to go in the 2014 WSOP Main Event, the prospect of Phil Ivey knocking Daniel Negreanu from the top of the “All-Time Money List” gained momentum yesterday, after Ivey dominated the action on Day 2C of the tournament and is in pole position heading towards the money and the $10 million first prize.

Of course, the 1,500 or so players that remain in the Main Event might have their own opinions about whether Ivey can add to his 10 WSOP bracelets, but on yesterday´s evidence, he is going to be a hard man to beat.

Ivey Over Half a Million Chips

Phil Ivey came into Day 2C of the 2014 WSOP with a fairly healthy 187,025 chips for sixth place overall, but he quickly leap-frogged into the chip lead with the dual KO of Lazaro Hernandez and Fabian Scherle in an incredible hand in which – after the flop of 10♥ 9♦ 6♠ – Scherle had moved all-in with pocket Kings, Ivey had re-raised with trip Sixes and Hernandez called with a flopped Ten-high Straight. The board completed 5♥ and 10♣ to give Ivey a Full House and increase his chip stack to 397,000 chips.

Thereafter, Ivey was on a roll – crippling Bryan Micon and busting out an opponent with a rivered Ace-high flush against the opponent´s flopped pair of Queens, before taking 50,000 chips from another opponent with K♥ 4♥ on a King-high board. Ivey had a quiet last level – except for a lively discussion with Jared Bleznick about a $50,000 bet at Evens that he would make the final table – and finished the night with 505,500 chips.

Plenty of Brits Among Chasing Pack

Behind Phil Ivey, there is a roster of big names waiting to take Phil Ivey´s position at the top of the chip counts should his hot run be extinguished. Daniel Negreanu suffered a “horrendous” last level to slip from 175,000 chips to 39,800 chips, but Raul Mestre (477,900 chips) and Michael Aron (468,000 chips) made substantial late gains to finish third and fourth on the overall leaderboard (below) behind Day 2A/B chip leader Tim Stansifer.

Further down the chasing pack there is a strong contingent of UK poker players looking to make a strong run towards the money in the 2014 WSOP Main Event. Stuart Rutter (199,500 chips) and Christopher Sly (198,300 chips) heads a dozen or so players from across the pond, which includes Triple Crown winner Jake Cody (80,000 chips), WSOPE Champion James Bord (80,000 chips) and runner-up in this year´s EPT Grand Final, Jack Salter (70,000 chips).

Leaving on a Jet Plane

Although it was a pretty good day generally for “established” poker players, not all found the cards when they needed to, and bust from the 2014 WSOP Main Event. Eric Baldwin looked good for a double up with K♦ K♣ against Avinash Kataria´s Q♣ Q♦ until the Q♠ spiked on the River to send the former bracelet winner to the rail; and Matt Stout fell to a Turned Ace-Five wheel after committing the last of his chips with a pair of Queens.

Former WSOP Champion Joe Cada bust “the classic way” when running his pocket Kings into Dennis Longoria´s pocket Aces, while another former “Joe” champion – Joe Hachem – lost his seat when his Ace-Jack failed to connect with the board against Matthew Sedgeman´s trip Sixes. Gus Hansen missed his open-ended straight draw to fall to a player with two pairs, and Phil Hellmuth bust out after being crippled by Matt Waxman A♣ K♥ > Q♥ Q♣ before getting the last of his chips in with Ace-Rag against an opponent´s Ace-Jack.

Looking Ahead to Day 3 of the 2014 WSOP Main Event

The final number of survivors who negotiated the two Day 2s is not yet available, but it is anticipated that more than 1,500 players will return to the Rio All-Suites Hotel and Casino tonight to continue their quest for the $10 million first prize and WSOP glory. When play resumes, players will be entering Level 11 with blinds of 800/1,600 and a 200 chip ante, and the action is schedule to last for another five 2-hour levels.

Unlikely as it is that the 693-player bubble will burst tonight, those who have the best +EV at the moment include: