After five levels of action on Day 2A/B of the 2014 WSOP Main Event, Tim Stanisfer has a substantial chip advantage over the 600+ survivors going into Day 3. 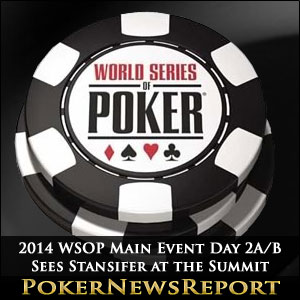 After five levels of action on Day 2A/B of the 2014 WSOP Main Event, Tim Stanisfer has a substantial chip advantage over the 600+ survivors going into Day 3.

Yesterday saw the first of two Day 2s played out in the 2014 WSOP Main Event, as the 505 players who safely negotiated Day 1A joined up with the 1,428 players who advanced from Day 1B to pack the Rio All-Suites Hotel and Casino once again.

For nearly two-thirds of the players the day would end in disappointment, while the remaining players are split between those who are making an early charge towards the $10 million first prize and those who are patiently biding their time to make their move once the money bubble has been burst.

Stanisfer at the Summit – Some Top Names in Behind

With thousand of players involved in the action on Day 2A/B of the 2014 WSOP Main Event, it was hardly surprising that Tim Stansifer´s late rise to the top of the chip counts went unnoticed. Much of the early attention was focused around Day 1A chip leader – Martin Jacobson – who was crushing his table to be one of the first players beyond the 300,000 chip mark shortly after the dinner break.

Thereafter attention switched to Joe Kuether – who flopped a spade flush to crack an opponent´s pocket Kings and be the first player over 400,000 chips – and Tom Cannuli, who momentarily took the chip lead before losing a big pot to Kitty Kuo. Other players to finish Day 2A/B with notable stacks outside the Top 10 (below) include Paul Tedeschi (336,600 chips) and Antonio Esfandiara (277,800 chips), but there are a stack of notable players waiting patiently in the wings to take centre stage later in the tournament.

Not a Good Day for the Ladies

Naturally there were many famous faces who bust out from the 2014 WSOP Main Event on Day 2A/B, but there was a considerable imbalance between the proportion of top female players who bust out compared to the men. During the five levels of action we lost 2012 WSOP Main Event winner Greg Merson, Party Poker´s Mike Sexton, and November Niner Michiel Brummelhuis.

The top two players in the WSOP Player of the Year race – Brandon Shack-Harris and George Danzer also hit the rail during an eventful day, but – other than for Kitty Kuo (who lost a big pot towards the close of play to finish with 70,200 chips) and top Brazilian poker player Maria Mayrinck (181,800 chips) – it was not a good day for the ladies.

Vanessa Selbst, Amanda Musumeci, Liv Boeree, Jessica Dawley, Elisabeth Hille and Annette Obrestad were among a stack of female poker players who left the tournament on Day 2A/B – Annette Obrestad being particularly unfortunate to get all her chips in with 9♦ 7♦ on a flop of 10♥ 8♠ 6♥ (for a Ten-high straight) against David Farber´s J♦ J♠, and seeing Farber hit the 6♠ and J♣ on the Turn and River to make a runner-runner Full House.

Looking Ahead to Day 2C and Updated Chip Counts

Tonight it will be the turn of the players who survived Monday´s Day 1C to play a further five two-hour levels of play – including Phil Ivey, Daniel Negreanu, Gus Hansen and Phil Hellmuth. Their goal will be to carry chips forward into Thursday´s Day 3, when the fields from both Day 2s will combine for Level 11 and there will be a clearer picture of the contenders for the 2014 WSOP Main Event. Those who will enjoy a relatively stress-free day today include: