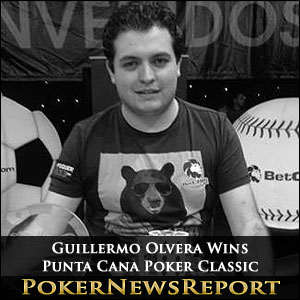 Due to the fantastic packages being offered by primary sponsor Americas Cardroom, 490 players arrived in the Dominan Republic last week to compete in the $500,000 guaranteed Punta Cana Poker Classic Main Event – smashing the guarantee and creating a $712,950 prize pool which was shared by the top fifty players.

The $1,650 buy-in tournament attracted such names as WSOP November Niner Marc Etienne “Go_Irish_Go” McLaughlin and last year´s WPT Montreal Main Event winner Jonathan Roy but, by the time the final table was set, both players had been sent to the rail. When play resumed at the Hard Rock Hotel and Casino, Chilean poker player Leo Otazo held the chip lead ahead of two former WPT Main Event winners – Chanracy Khun and Anthony Zinno.

With blinds of 25,000/50,000 (ante 5,000) when the final table of the Punta Cana Poker Classic got underway, it was no surprise to see Stuart Marshak shoving from the off. Twice in succession he managed to collect the blinds and antes, but it was to be third time unlucky when he shoved with pocket Queens into the Ace-King of Jonathan Iavouelli, and an Ace landed on the flop – Marshak quickly out in ninth place.

Jonathan Iavouelli chipped up almost immediately to beyond one million chips when getting all-in – again with Ace-King – and receiving a call from Derrick Scott (pocket Sixes). A King on the flop and a second one on the River crippled Scott, and the American was soon eliminated in eighth when Chanracy Khun rivered a straight and Scott missed his club flush draw.

Despite two quick eliminations, the action continued thick and fast. Patrick Serda was bust in seventh by Anthony Zinno after his flopped set of Eights was not good enough to overcome Zinno´s flopped set of Aces, and Gabriel Diaz was sent to the rail in sixth when Chanracy Khun rivered a Ten to best Diaz´ flopped top pair of Nines and quieten the Peruvian LSOP winner´s vocal support.

With the elimination of Diaz, Chanracy Khun moved into the chip lead; but he was soon to be eliminated himself after Anthony Zinno had forced him out of a massive pot, and then he suffered an incredible bad beat at the hands of Leo Otazo.  Otazo had moved all-in with J♠ J♥, and it was an easy call to make for Khun – who was holding K♦ K♠. However the board ran 8♥ 9♠ Q♥ / 10♥ / 9♦ to give Otazo a straight and move him into the chip lead. A rather upset Khun gone in fifth place.

There was a Mexican, a Chilean and two Americans …

The formerly anonymous Guillermo Olvera now started to get into the act, and he reduced Anthony Zinno down to the short stack before Leo Otezo finished the job Ace-Nine > Jack-Ten. Olvera and Otezo combined again to first cripple and then eliminate Jonathan Iavouelli in third; but only after the last American player standing had got in with pocket Kings against Otezo´s pocket Sixes, and watched in horror as the board gave Otezo a rivered straight.

Going into the heads-up (blinds 60,000/120,000 – ante 15,000) both players were similarly stacked with about 5 million chips each, and for two hours the balance of power swung back and forth to the cheers of “Vamos” from the animated Mexican and Chilean supporters. Eventually, Guillermo Olvera opened up a gap between the two players and, in attempting to recover his position ahead of the Punta Cana Poker Classic, Leo Otezo moved all-in with Q♦ 2♦ on the flop of 10♦ 3♠ {4♦ç.

Olvera made the call having two diamonds of his own – K♦ 7♦. The Turn of 6♣ was of no use to Otezo, as a Five on the River would have given Olvera a better straight, and the Chilean was left hoping for a Queen on the River. Unfortunately for Otezo – and against the run of play on a final table that had already seen its fair share of bad beats – the A♠ completed the board and Mexican Guillermo Olvera had become the 2013 Punta Cana Poker Classic Champion.