Carter Gill added another Latin American success to his overseas résumé by following up victory in the LAPT Uruguay with a win at the LSOP Millions in Panama. 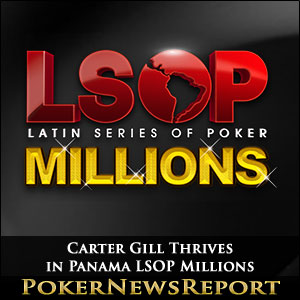 Carter Gill added another Latin American success to his overseas résumé by following up victory in the LAPT Uruguay with a win at the LSOP Millions in Panama.

Carter Gill is one of poker´s journeymen. To date he has cashed in ten different countries afar apart as New Zealand, the Philippines and Costa Rica; and now he has added victory in the Panama LSOP Millions to the success he enjoyed in last November´s LAPT Grand Final in Uruguay.

Although not being one of his most profitable victories, the win in Panama was one of his toughest – with 1,290 players ponying up the $850.00 buy-in or qualifying online to enter the event across three opening flights – with only the top 10% of each Day 1s field qualifying for Day 2.

Consequently, 130 players took their seats on Day 2 – of which just 109 were due to cash – and after a further three days of action, the final table of nine was set when PokerStars Pro Nacho Barbero bust out Ecuadorian poker player Fernando Murrieta A♦ A♠ > 9♣ 9♥.

Gill Wastes No Time to Move into Big Lead

When the final table got underway at the Majestic Casino in Panama City, the nine remaining players were deep into Level 27 (blinds 25K/50K – ante 5K). Maziar Keshavarzi started brightly with a turned set of Fours to make a hole in Nacho Barbera´s stack, and Guillermo Echevarria was reduced to short stack after Carter Gill had doubled-up through him.

UK poker player Adam Reynolds took advantage of Echevarria´s demise to eliminate the Peruvian in ninth place A♦ 10♠ > A♣ 9♣, and Oscar Ortiz surprisingly bust in eighth – shoving from out of position with A♠ 7♣ and getting called by Leonardo Tarazona (A♣ K♥). Ortiz paired his 7♣ on the flop, but Tarazona also paired his K♥ to bust Ortiz from the LSOP Millions.

Adam Reynolds had the misfortune to be sent to the rail in seventh place when running his pocket Queens into Carter Gill´s pocket Aces, and Gill shot into a massive chip lead when spiking the Q♥ on the River to eliminate Francis Cruz in sixth A♦ Q♣ > 6♠ 6♦.

As the blinds crept up to 40K/80K (ante 10K), Nacho Barbero´s tournament came to a close. The PokerStars Pro moved all-in with J♦ 10♥ and was called by Leonardo Tarazona (K♣ 8♦). Barbero still had options after Tarazona paired his Eight on the Turn, but they failed to materialise on the River (6♣) and Barbero was sent to the rail in fifth place.

Tarazona´s enhanced chip stack failed to enhance his chances of winning the LSOP Millions, and he was reduced to being the short stack after being forced out of several substantial pots by Carter Gill (who was now up to 11 million chips and running away with the contest). The last of Tarazona´s chips went to Raz Alon with A♥ 5♥, but Alon´s pocket Eights held up, and Tarazona was eliminated in fourth place.

The heads-up was set shortly after when Maziar Keshavarzi shoved from the Big Blind with A♠ 9♣. Carter Gill made the call with A♥ Q♣ and safely negotiated the community cards to take a massive 13 million -v- 3.2 million chip advantage into the heads-up against Raz Alon.

The heads-up between Carter Gill and Raz Alon lasted just a couple of hands. In the final hand all the chips went into the middle during the pre-flop betting after Alon Raz had four-bet up to 1.1 million chips and Carter Gill had put the Israeli all-in.

Alon Raz completely missed the board of J♣ 8♥ 8♠ / 3♥ / 6♣, and Carter Gill had become the inaugural LSOP Millions Panama Champion.