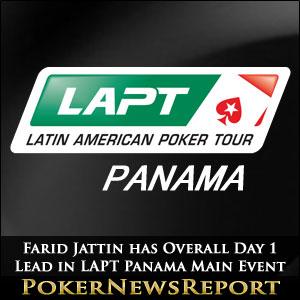 With the LAPT Panama Main Event allowing players who bust on Day 1A to re-enter on Day 1B, a huge turn-out was expected yesterday at the Veneto Wyndham Grand Hotel and Casino in Panama City, and organisers were not disappointed.

A further 367 entries for the $1,550 + $150 buy-in Main Event were received yesterday – bringing the total number of entries up to 542 – with 121 players surviving the ten one-hours levels to join the 58 players who safely negotiated Day 1A.

As is typical in tournaments with a huge amount of entries, the LAPT Panama Main Event chip leaders changed places throughout the day before Farid Jattin came from nowhere (after firing a third bullet in Level 6) to lead the field at the close of play. Jattin´s chip stack at the end of Day 1B is 183,400 chips – significantly ahead of second-placed Rubens Bontempo (151,600 chips) and the 147,400 chip stack that Guillermo Olvera bagged up on Day 1A.

Behind the three chip leaders is a field packed with quality. PokerStars Team Pros Leo Fernandez (98,800 chips) and Humberto Brenes (66,900 chips) took advantage of the re-entry opportunity to join fellow Team Pro Nacho Barbero at the tables for today´s Day 2; and Scott Montgomery – who was one of the inaugural “November Niner´s” back in 2008 – is not too far behind the chip leaders with 110,400 chips.

Other significant players to survive the Day 1B action include Victor Sbrissa (93,500 chips) – who has a LAPT Brazil victory under his belt – and Nicolau Villa-Lobos, who readers may remember gave Daniel Negreanu a run for his money in the 2013 WSOPE High Rollers Event after winning the 2013 UKIPT Edinburgh Main Event.

Not every player of note achieved a seat in today´s Day 2, and once the late registration period closed at the end of Level 7, there were no further opportunities for players such as PokerStars´ Team Pro Andre Akkari to re-enter after losing the last of his chips with A♠ J♠ against an opponent´s A♣ Q♠ (the board ran A♦ Q♣ K♣ / 6♠ / 6♥ just to rub salt into Akkari´s wounds!).

Another former November Niner – Badih “Bob” Bounahra – also graced the LAPT Panama Main Event with his presence, and for a while he and Scott Montgomery were seated at the same table. Unfortunately Bounahra could not replicate the skills that saw him finish in seventh place behind Pius Heinz in the 2011 WSOP Main Event, and he was eliminated just after the dinner break.

Looking Ahead to Day 2 of the LAPT Panama Main Event

When Day 2 of the LAPT Panama Main Event gets underway, the remaining 179 players will be entering Level 11 (blinds 600/1,200 – ante 300). Play is scheduled to continue until just 32 players remain, during which time the money bubble will be burst and we will have a clearer picture of who is likely to appear on Sunday´s eight-handed final table.

Those looking favourite to still be involved in the action at the climax of the LAPT Panama Main Event include: