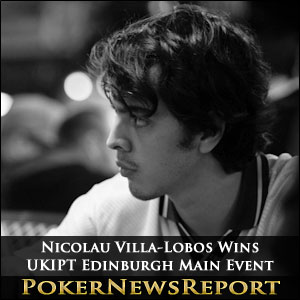 It was a dramatic and emotional day in Edinburgh yesterday, as players from eight different countries filled the eight seats around the UKIPT final table. Naturally, there was plenty of home support for local boy David Vamplew (appropriately attired in an Edinburgh University Poker Society hoodie) and plenty of vocal encouragement for James Sykes (Jake Cody never fails to disappoint) but, at the end of the end, those who were cheering the loudest were those who had traveled the furthest – all the way from Brazil.

With less than 4% of the chips in play, and blinds at 20,000/40,000 (ante 4,000), the Brazilian needed something to happen fast – and it did. In just the second hand of the day, Villa-Lobos got all his chips into the middle from early position with 4♥ 4♦ and Chris Derrick (2♣ 2♥) made the call. The 4♠ on the flop gave Villa-Lobos a set, and the 4♣ on the river made Quads. A nice double up to start with, but the Brazilian was far from finished.

20 minutes later, Christian Bergstrom´s shove with K♦ Q♦ was called by Vladislav Donchev (6♣ 6♦) and Villa -Lobos (Q♣ Q♠) also announced he was all-in. Donchev made the call, but could not improve against the pocket Queens. With no King, and few diamonds on the board, Bergstrom was eliminated in eighth, while Villa-Lobos stacked up more than 1.6 million chips to take temporary second place in the event.

The Rise and Fall of David Vamplew

David Vamplew was aiming to add a second UKIPT title to his London victory in September 2010, and for a while it looked as if he was going to run away with the Main Event. While Nicolau Villa-Lobos was still counting his chips from the Bergstrom elimination, David Vamplew knocked out Guido Braye (A♥ A♦ > K♠ J♣) and Jamie Sykes (A♠ K♥ > K♦ K♣), taking his chip stack to 3.6 million. However the wheels were soon to fall off his UKIPT challenge.

Nicolau Villas-Lobos had reduced the field to four when turning a straight to bust Chris Derrick (5♣ 3♥ > A♣ 4♦) and then flopped another straight to double up against David Vamplew (4♠ 3♠ > 10♠ 10♥). Vamplew also contrived to double up Przemyslaw Dajer (A♥ 10♦ > J♠ 5♠) and pocket Tens were his ultimate downfall when getting his last 2 million chips into the pot against Villa-Lobos – only for the Brazilian to roll over A♠ K♥ and hit the K♠ on the flop.

With David Vamplew gone from the game, Nicolau Villa-Lobos quickly wrapped up his final two opponents. Przemyslaw Dajer was incredibly unlucky to see his A♣ J♥ turned over by Villa-Lobos´ A♠ 4♠ on a board that ran 6♦ 5♣ 8♠ J♦ 7♥ but Vladislav Donchev can have no complaints about failing to turn a 6:1 chip disadvantage in the Heads-Up and finally succumbing in a A♣ Q♣ > Q♥ 7♥ race to complete Nicolau Villa-Lobos´ incredible last-to-first final table success.