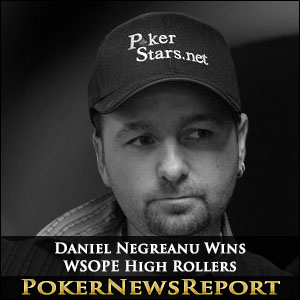 Daniel Negreanu won his sixth World Series of Poker bracelet last night in the WSOPE High Rollers Event – coming from last to first on the official final table. The €25,600 buy-in WSOPE High Rollers tournament eventually finished with a dramatic crescendo following two fairly dour days of action. Much of the early Day 3 drama surrounded which nine of the remaining thirteen players would cash in the event and whether or not Daniel Negreanu would achieve his second WSOP Player of the Year title (he had to finish eighth or better). Consequently the dynamics of the two tables when play resumed at the Casino Barriere in Enghien-les-Bains were very different – with the short-stacked players on chipleader Philipp Gruissem´s table trying to preserve their stacks, while the short stacks in front of Daniel Negreanu knowing that he was unlikely to take any chances with marginal hands.

Helps Me – Helps Me Not

Daniel Negreanu´s quest to become only the second player to be WSOP Player of the Year got off to the best possible start when the field was reduced to twelve in the first hand of the day. Tom Bedell got the last of his chips in with Q♣ 10♦ and was called by Scott Seiver (A♥ K♦). Bedell was ahead after the flop of J♦ J♠ 10♣, but the Q♦ on the Turn and K♠ on the River gave Seiver a Broadway straight, and Bedell left the tournament in thirteenth. Several hands later and Phil Laak was dispatched to the rail in twelfth place after his K♥ Q♦ failed to improve past Eric Seidel´s 6♦ 6♣ and encouraged by the quick departure of two short stacks, Negreanu called Joni Jouhkimainen´s Q♣ J♥ shove with pocket Threes, but Jouhkimainen hit the J♦ on the flop to double up and reduce Negreanu to 263,000 chips.

Pace Slows Down after Kaverman´s Exit

Byron Kaverman was unlucky to be eliminated in eleventh place – shoving with A♥ 6♦ and being called by Nicolau Villa-Lobos K♥ Q♣. The board ran K♠ Q♥ 2♣ / K♣ / 6♥ to give Villa-Lobos trip Kings and send Kaverman to the rail. Villa-Lobos had earlier won a substantial pot from Eric Seidel with a post-River shove, and – with Kaverman´s elimination – temporarily moved into second place with more than 1 million chips, until Philip Gruissem rivered a Full House to slash his chip stack in half. With one more player needing to be eliminated before the money bubble was burst – and two more players having to bust before Daniel Negreanu was to become WSOP Player of the Year – the game became very tense. Timothy Adams overtook Negreanu in chips when doubling up against Scott Seiver A♠ K♦ > A♦ J♣ and, over the next ninety minutes the chip stacks of both Marc McLaughlin and Joni Jouhkimainen dwindled down to around four Big Blinds.

McLaughlin is the Bubble Boy – Negreanu is WSOP POY

Eventually Marc McLaughlin (J♠ 4♦) had no option to call off his stack when Timothy Adams shoved into him from the small blind with 8♣ 6♠. The flop of 5♠ 6♣ 10♣ put Adams in the lead in the hand, and he stayed there through the 7♥ Turn and K♥ River to bust McLaughlin one place from the money and leave Daniel Negreanu one elimination away from becoming WSOP Player of the Year. Philipp Gruissem´s suggestion that everybody should donate some of their chips to the very short-stacked Joni Jouhkimainen was met with laughter by everybody other than Daniel Negreanu – who was himself down to his last 12 Big Blinds – but it was Gruissem who eventually eliminated the Finn A♣ J♥ > K♥ 5♥ to set the eight-handed official final table and confirm the short-stacked Negreanu as Player of the Year.

Daniel Negreanu´s ascension up the leaderboard nearly did not happen. In the second hand of the official final table, he found himself all-in with 10♣ 9♠ against Jason Koon´s K♠ Q♥, but fortunately for Negreanu the board ran 8♠ 8♥ 6♥ / 6♣ / 8♦ to split the pot. Two hands later he was all-in again with A♣ J♣ and received a call from Erik Seidel (K♥ J♦). Negreanu flopped the nut flush to double up, and Seidel was eliminated in eighth place soon after when Scott Seiver (A♥ 7♦) flopped Trip Sevens to best Seidel´s A♣ J♦. As the game entered the next level (blinds now 10,000/20,000- ante 3,000) Negreanu found another double-up when his A♣ K♥ paired on the flop to best Timothy Adams 10♠ 10♦, and he then took a 200,000 pot from David Peters with a massive River bet – claiming that he had a set of Tens. Further post-flop aggression enabled Negreanu to take down uncontested pots from Scott Seiver and Philipp Gruissem and chip up over one million chips.

Jason Koon had played an intelligent tournament throughout the three days (and had put up with sitting alongside Daniel Negreanu for three hours) but made the unfortunate decision to shove all-in with A♥ K♣ and ran into David Peters´ A♣ A♦ and was bust in seventh. With a little more elbow room at the table, Negreanu became even more active and was lucky to bust Scott Seiver (A♠ J♦) in sixth when rivering the Q♠ to pair his K♦ Q♦. Negreanu´s talent for spiking decisive river cards continued with the elimination of Timothy Adams in fifth. Adams (Q♣ 8♦) had shoved his short-stack with no takers several times previously, but on this occasion got a call from Negreanu (9♥5♥). Timothy Adams looked good to score a double up on the Flop and Turn of 3♣ K♠ 3♠ / 10♦, but the 9♦ was dealt on the River to pair Negreanu´s hand and send Adams to the rail shortly before the dinner break.

It was probably more the huge pay jumps between first and fourth – rather than the big plates of sushi that were eaten during the dinner break – that caused some very deliberate play during the next level. Philipp Gruissem, David Peters, Nicolau Villa-Lobos and Daniel Negreanu were all closely stacked, but after David Peters had folded to an aggressive post-Turn bet from Negreanu, he became the short-stack and was eventually eliminated by Villa-Lobos A♠ Q♣ > 10♥ 10♠ when the Brazilian paired his Queen on the flop. Philip Gruissem (1,375,000 chips) now became the short-stack behind Villa-Lobos (2,620,000 chips) and Daniel Negreanu (2,005,000 chips), and he was eliminated from the WSOPE High Rollers Event on his first attempted shove with A♣ 4♣, when he was called by Negreanu A♠ J♦ and Negreanu hit the J♣ on the flop to bust the German in third place.

Despite going into the heads-up with a 2:1 chip advantage, Negreanu did not find things going his own way at the start of the heads-up. Nicolau Villa-Lobos (J♥ 5♥) flopped a heart flush and got three streets of value from Negreanu to level up the chip counts. The two players remained in close contention over the next forty hands until Negreanu established a lead when hitting two pairs with 9♣ 5♣ and then following it up with a pair of Jacks two hands later. After two hours of heads-up play, Negreanu eventually got his man. Villa-Lobos (5♦ 5♣) three-bet all-in from the Small Blind and Negreanu had no hesitation in calling with J♦ J♠. The board of Q♦ 9♥ 2♦ / K♦ / 3♣ presented no risk to Negreanu´s better hand, and he had won his sixth WSOP Bracelet and the WSOPE High Rollers first prize of €725,000 ($1,001,000).