Race to be WSOP Player of the Year Resumes Next Week

The Asia-Pacific leg of the World Series of Poker gets underway next week, with a handful of players still in contention to be WSOP Player of the Year 2014. 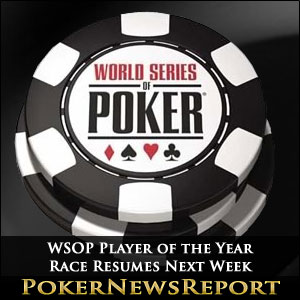 The Asia-Pacific leg of the World Series of Poker gets underway next week, with a handful of players still in contention to be WSOP Player of the Year 2014.

Next Thursday – 2nd October – the cards will be in the air for the first of ten WSOP bracelet events to be contested at the WSOP APAC; and, over the next seventeen days, millions of dollars will be won and lost at the Crown Casino in Melbourne.

Although the ten individual event winners will grab their share of the attention, the main focus will revolve around who is going to be the 2014 WSOP Player of the Year – and such is the prestige of this title that many of the players near the top of the WSOP POY leaderboard are flying to Australia in order to compete in the Asia-Pacific Series and win valuable points.

WSOP POY – Tight at the Top

Going into the WSOP APAC, there is little to choose between Brandon Shack-Harris and George Danzer. Both players had stellar results from the summer series in Las Vegas, with Shack-Harris winning one event, final tabling three more events and cashing in a total of six events; while George Danzer won two bracelets, appeared at a third final table and cashed a total of seven times.

The difference between the two players is just 6.8 points – a difference that could be wiped out by Danzer finishing in the top 30% of one tournament if Shack-Harris failed to score. Both players are confirmed as attending the WSOP APAC but, such is the nature of the WSOP Player of the Year race, that the title is still wide open if another players had a series of good runs over the next two and a half weeks.

Negreanu and Colman Still in Contention

Two other players who are also likely to make the journey to Australia are Daniel Negreanu and Dan Colman. Daniel Negreanu cashed in an incredible nine WSOP events in the summer and was twice denied his seventh WSOP bracelet in close finishes to Event #13 and in the Big One for One Drop. Negreanu´s conqueror in the “Big One” – Daniel Colman – also finished third in the Heads-Up Event (Event #40) and cashed in one further event to sit one place behind Negreanu on the WSOP POY leaderboard.

Other contenders for the title who may also make an appearance at the Crown Casino in Melbourne during October include John Hennigan – who won the Poker Players Championship in the summer – and Justin Bonomo, who won his first WSOP bracelet earlier this year after eight years of trying and seven WSOP final table appearances. The table as it stands going into the WSOP APAC looks like this:

WSOP POY points are awarded depending on a player´s finishing position within a tournament and then multiplied according to the number of players entering the event and the buy-in. The winner of the WSOP APAC Main Event could pick up 427.50 points if 1,000 players were to enter the tournament – which could seriously shake up the race to be WSOP Player of the Year.

Could Politano Pip Them All?

One other player confirmed as attending the WSOP APAC is November Niner Bruno Politano. The Brazilian poker player has recently signed up as an ambassador with 888Poker, and he will be joining his fellow ambassadors Shane Warne, Sofia Lovgren and Xuan Liu when play gets underway at the Crown Casino next Thursday. Should Politano complete the double of winning the WSOP APAC Main Event in October and the final table of the WSOP Main Event in November, he could still pick up the title of WSOP Player of the Year!

You can find out how the race for the WSOP Player of the Year develops – and catch up with all the results from WSOP APAC – by following @PokerNewsReport on Twitter.