Paul Volpe won his first WSOP bracelet when taking down the No Limit 2-7 Lowball event, denying Daniel Negreanu his seventh Series victory in the process. 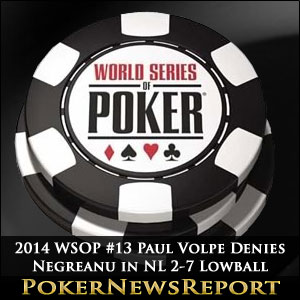 Paul Volpe won his first WSOP bracelet when taking down the No Limit 2-7 Lowball event, denying Daniel Negreanu his seventh Series victory in the process.

Gamblers who accepted Daniel Negreanu´s offer of even money on neither him nor Phil Ivey winning a bracelet at the 2014 WSOP had a major sweat on last night, as Daniel Negreanu made a strong challenge for gold in Event #13 – the $10,000 buy-in No Limit 2-7 Single Draw Lowball tournament.

A relatively small entry of 87 players had been reduced to just 36 by the end of Day 1, and the 14-player money bubble burst early on in Day 2 when Galen Hall was dealt an Ace in his one-card exchange and bust by Brian Rast´s Ten-low.

At the time, Paul Volpe was the second-shortest stacked player, but a strong last level of Day 2 enabled him to chip up considerably and – after eliminating Rep Porter in ninth place – he came to the final table as chip leader:

Mercier and Volpe Slug it out at the Top

The action at the final table of the 2014 WSOP Event #13 was dramatic right from the first hand – in which Jason Mercier drew a Ten-low to relieve Abe Mosseri of 52,000 chips. Mosseri continued to leak chips throughout the first two orbits of the button, and was sent to the rail in seventh place when his Ten-low hand was just beaten by Larry Wright´s Nine-low.

Mercier continued to remain active, and was responsible for the elimination of John Monnette in sixth place (Nine-Seven low > Monette´s Nine-Eight low) to move into the chip lead; but Paul Volpe battled back and sent Larry Wright to the rail in fifth place when Wright´s single card draw resulted in him getting a Queen-low against Volpe´s Jack-low.

Volpe Leads Negreanu into the Heads-Up

Daniel Negreanu had also been pretty active during the early levels, and he chipped up into second place (behind Mercier) when finding the right card to complete his Ten-low against Brian Rast´s Queen-low and eliminate Rast in fourth. But Paul Volpe leap-frogged both Mercier and Negreanu into the top spot when making a 7x 6x 5x 3x 2x low hand to relieve Mercier of 230,000 chips and Negreanu of his blinds.

Jason Mercier was eventually eliminated in third place – but under unfortunate circumstances. Having moved all-in from the button and received a call from Paul Volpe, Mercier tabled 8x 7x 4x 2x with one card to exchange. Volpe tabled the dominated 8x 7x 6x 2x and also had one card to exchange. Mercier was a strong favourite to double up, but whereas Paul Volpe found a 4x to improve his hand, Mercier was also dealt a 4x, which paired it and sent him to the rail in third place – Paul Volpe taking a 1,710,000 -v- 900,000 chip advantage into the heads-up against Daniel Negreanu.

After the quick-fire action of the first couple of levels, the heads-up climax of the 2014 WSOP Event #13 was a pretty painful affair for Negreanu´s supporters, as his chip stack slipped further behind that of Paul Volpe´s over the next eighty-five hands – with Volpe adopting the strategy of playing small-ball poker and not responding to Negreanu´s table banter or calling any of his sizeable bets.

Ultimately, Daniel Negreanu was also unfortunate to be eliminated from the NL 2-7 Lowball event, getting his chips all-in in the final hand with Jx 6x 5x 4x against Paul Volpe´s Jx 10x 7x 6x. Volpe exchanged first and was dealt a 3x; and Negreanu only needed to hit any non-pairing card with a value of Nine or lower to double up into contention for the bracelet. Unfortunately for Negreanu, the dealer tossed him a Queen, and Paul Volpe had won his first WSOP bracelet and the $253,524 first prize.