A showdown between Daniels during heads-up play in the WSOP $1 million buy-in Big One for One Drop was won by Daniel Colman along with $15.4 million. 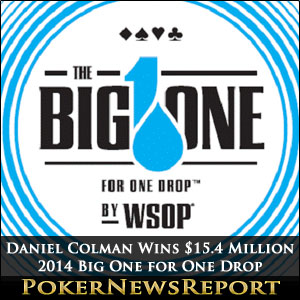 A showdown between Daniels during heads-up play in the WSOP $1 million buy-in Big One for One Drop was won by Daniel Colman along with $15.4 million.

Colman outlasted Daniel Negreanu to take down the second largest prize in poker tournament history, as the 2012 Big One for One Drop and its $18 million first place prize won by Antonio Esfandiari remains the largest. But the spotlight today is on the 23-year-old Colman, who jumped to sixth place on poker’s all-time money list with the victory.

Colman can thank a gutshot straight for his new-found fame and riches. He was behind to Negreanu’s two pair after a A♥J♠4♠ flop connected with the A♦4♣ hole cards of ‘KidPoker.’ Prior to the flop, all the chips went into the middle after Colman led with a four million chip raise on his K♦Q♥ and Negreanu shoved his remaining 20,850,000 in chips.

Colman had only four outs after the flop and when the dealer peeled the 10♠ on the turn, the railbirds supporting Colman cheered loudly. Now it was Negreanu who had only four outs with just the river card remaining, as his cheering section remained stunned and silent. Fifth street came as 7♠, eliminating KidPoker in second place and crowning Colman as the Big One for One Drop champion.

With his runner-up finish and prize of $8,228,001, Negreanu took over the top spot on the all-time money list. But with such huge prize pools now in play due to the Big One for One Drop event, we will likely see a new all-time money leader following each and every installment of the $1 million buy-in tournament.

Day 3 action began with nine players and only eight spots reserved for payouts. That meant that the first player eliminated of the final nine would walk away from the table without making a stop at the cashier’s cage to collect a prize. Tom Hall was that unlucky player after his pocket tens were beaten when Negreanu hit an ace on the flop to pair up with his A♠Q♦ in the hole.

Cary Katz earned $1,306,667 for his eighth place finish, done in by the pocket jacks of Negreanu while holding 8♥8♣. KidPoker was involved in three all-ins in the span of 10 hands culminating in the KO of Katz.

Next to go was Paul Newey ($1,418,667) in seventh, who began the day as the shortest stack. Newey did manage to double up a couple of times to remain in the game for a spell. But he eventually was sent to the rail after he couldn’t pair the board with his A♣J♥ versus Rick Salomon.

Scott Seiver ($1,680,000) finished in sixth place as yet another victim of Negreanu’s aggression. He was followed to the rail by Tobias Reinkemeier ($2,053,334) in fifth, who will also be mentioning the name of KidPoker when he explains to friends and family the details of the hand that ended his deep run.

Salomon ($2,800,000) will have a different knock out story, as his entailed pocket eights failing to hold up against the A♣10♥ of the eventual winner. Salomon started the final day as chip leader, but lasted only until fourth place.

The final elimination prior to heads-up play saw Christoph Vogelsang playing for his tournament life withK♦Q♣. But his quest for more than $15 million in prize money ended when the community cards failed to deliver against the pocet fives of Colman. Vogelsang is $4,480,001 richer, but may likely need some time to recover from coming ever so close to taking down 2014 Big One for One Drop championship.

Colman began heads-up play in the lead and managed to hang on to win despite trading several lead changes with Negreanu. The young pro is having quite a year after his $2.1 million score for winning the EPT Grand Final €100,000 Super High Roller in April. And now a gold bracelet in the Big One for One Drop. Congratulations are in order for Daniel Colman for his magnificent play in claiming victory!