Accordingly to an Associated Press report, a licensing application for PokerStars could be submitted in New Jersey next week, with approval granted by the fall. 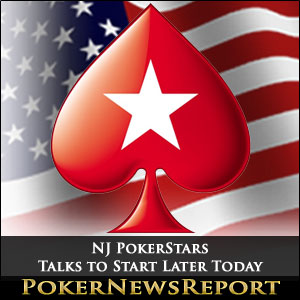 Accordingly to an Associated Press report, a licensing application for PokerStars could be submitted in New Jersey next week, with approval granted by the fall.

Less than a week after the proposed acquisition of PokerStars was announced, representatives of the sites new owners are reportedly travelling to New Jersey today (Thursday) to discuss PokerStars´ return to the States with the Division of Gaming Enforcement.

The news broke on the Associate Press “Big Story” website late last night after David Rebuck – Director of the New Jersey Division of Gaming Enforcement – told reporters that the Amaya Gaming Group Inc had been in touch and we plan to begin discussions with them tomorrow.

DGE “Encouraged” by the Sale of PokerStars

Rebuck gave several indications that the discussions with Amaya planned for later today could quickly lead to a licence application being approved. He said that the DGE had been encouraged by the sale of PokerStars and that the new owners (who are already licensed to provide online gaming in New Jersey for Caesars Interactive) will know what the rules are.

Rebuck was also reported as saying that a PokerStars presence in the Garden State would be a good story for New Jersey – where revenues from online gambling are considerably lower than what were first estimated – and that a quick license application from Amaya could result in approval to begin operations as early as the fall.

Amaya Keen to Deliver Quickly according to Lawyer

According to one of the company´s lawyers – Marie Jones – the Amaya Gaming Group is keen to get the licensing application process started straight away. Jones said that no application has been filed with the New Jersey DGE as yet, but one could be one their desks by as early as next week. They are optimistic they will get this done quickly she said.

However, among the excitement of PokerStars´ potential return to New Jersey, it has to be remembered that the acquisition of the world´s largest poker site is still subject to shareholder approval, and is not likely to be completed until the end of September or early October. Even if DGE approval of PokerStars´ licensing application is forthcoming, it is likely to be subject to the completion of the takeover, which could slow the process down and delay PokerStars´ return to New Jersey until the New Year.

All the indications are that PokerStars will return to New Jersey within the next six-eight months at the company´s third attempt. Originally, the company had intended to enter the New Jersey regulated market by purchasing the Atlantic Club and, after that deal fell through, PokerStars partnered with the Resorts Casino Hotel.

PokerStars´ license application was then suspended for two years by the New Jersey Division of Gaming Enforcement for the unresolved indictment of PokerStars´ owner Isai Scheinberg; although the DGE said at the time that the situation would be reviewed if significantly changed circumstances are demonstrated. It would appear that the acquisition of PokerStars by the Amaya Gaming Group is sufficiently significant for the DGE to reconsider the company´s license application, and sufficiently important for them to start the process later today.