PokerStars has announced that it will no longer continue legal efforts to purchase the Atlantic Club and will focus on its partnership with Resorts casino. 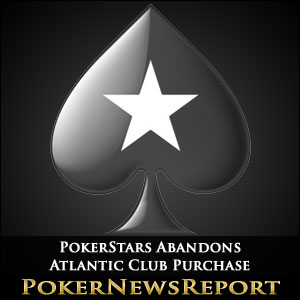 PokerStars has announced that it will no longer continue legal efforts to purchase the Atlantic Club and will focus on its partnership with Resorts casino.

After losing two court rulings, parent company Rational Group decided to withdraw its petition for an interim casino license necessary to acquire the Atlantic Club. PokerStars shelled out $11 million of the $15 million purchase price, but a contractual technicality allowed the casino owners to back out of the deal and perhaps seek a better offer from another buyer.

PokerStars is still smarting from losing that $11 million and will continue its legal battle in hopes of recovering the lost funds, the Press of Atlantic City reported. A $4 million termination fee also hangs in the balance.

Initially hoping to enter the U.S. online poker market as a casino owner in New Jersey, PokerStars has seemingly resigned itself to grabbing a toehold in the market via a partnership with Resorts Casino Hotel. The world’s top poker site has filed for a casino service industry license with the New Jersey Division of Gaming Enforcement.

That application was timely filed in order to team up with Resorts and launch in late November. Approval is not a done deal and PokerStars will be investigated thoroughly before state regulators give their rubber-stamped consent.

Language in New Jersey’s online gambling regulations does not preclude gaming companies who operated in the U.S. post-UIGEA from obtaining a license. The Garden State is seen as PokerStars best shot at entering what many envision to be a burgeoning online poker and gambling market in the newly-regulated U.S.

Rumors had previously circulated that the Atlantic Club was still willing to sell the casino to PokerStars, albeit at an inflated purchase price. However, PokerStars has laid those rumors to rest by no longer pursuing casino license authorization. Instead, the Rational Group will settle for getting in the game as a service provider of online poker software.