The New Jersey Division of Gaming Enforcement announced yesterday that it was suspending the review of PokerStars´ application for an online poker license. 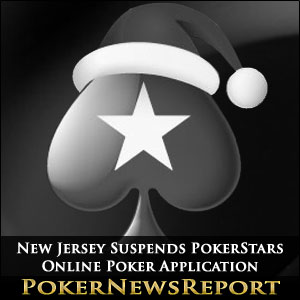 The New Jersey Division of Gaming Enforcement announced yesterday that it was suspending the review of PokerStars´ application for an online poker license.

The news broke yesterday that the review of PokerStars license application to provide online poker in New Jersey was to be put on hold for two years due to issues that the Division of Gaming Enforcement (DGE) have with the unresolved federal indictments against PokerStars´ former boss Isai Scheinberg.

In a statement that surprised few in the industry, Lisa Spengler – the DGE´s spokesperson – announced that the license application would be held in suspended status for a period of two years, although she did also state that the review of the application could be resumed at any time within the two year period if significantly changed circumstances are demonstrated.

The DGE´s Problem with Scheinberg

PokerStars´ founder Isai Scheinberg – although not a US citizen – is a fugitive from the State for failing to stand trial to answer criminal charges made against him by federal prosecutors in Manhattan in 2011 (the Black Friday indictments) for violations of UIGEA and the Illegal Gambling Business Act.

Despite stepping down as CEO of PokerStars when the company settled the Department of Justice´s civil case for $781 million in July 2012, Scheinberg continues to act in an advisory capacity for Rational Services Limited (PokerStars´ parent company), and was allegedly involved in negotiations for the failed purchase of the Atlantic Club when the company first attempted to venture into the New Jersey online gaming market.

Scheinberg Singled Out by Spengler

In Spengler´s statement, Scheinberg was singled out as the reason for the suspension of the license application, but there was no mention of Mark Tate – PokerStars´ Director of Payments – who was also accused in the Black Friday indictments, and who has yet to return to the US to face trial:

The Division´s determination [to suspend the review of the license application] is based primarily on the unresolved indictment against Isai Scheinberg for the alleged violation of federal gambling statutes, namely the Illegal Gambling Business Act and the Unlawful Internet Gambling Enforcement Act, and the involvement of certain PokerStars executives with internet gaming operations in the United States following the enactment of UIGEA.

Interestingly, Spengler´s statement made no comment on the suitability (or otherwise) of the company to provide online poker in New Jersey, or how PokerStars continued to provide a service to online poker players in the States after UIGEA was enacted in May 2006.

Hollreiser Wants to Maintain Dialogue with the DGE

PokerStars´ response to the announcement was pretty much what one would expect. Eric Hollreiser – PokerStars´ Head of Corporate Communications – said in a statement that the company was disappointed with the decision by the New Jersey DGE, but would remain in open dialogue with the Division of Gaming Enforcement and update them on changes in our situation as they occur.

Whether those changes occur within the next two years – and how PokerStars´ actions might affect their relationship with the Resorts Hotel and plans to build a $10 million poker room – we shall have to wait and see. However, for the present, players in New Jersey hoping to see PokerStars in action before the end of the year will have to put their hopes on hold.