The online poker behemoth PokerStars would begin construction of a $10 million poker room as soon as it acquired a gaming license in the Garden State. 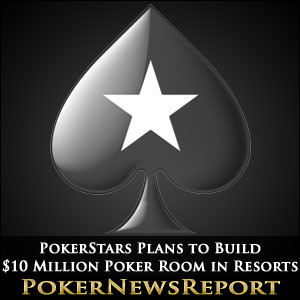 The online poker behemoth PokerStars would begin construction of a $10 million poker room as soon as it acquired a gaming license in the Garden State.

When the average poker player is asked to name the best poker rooms in Atlantic City, most will answer with familiar venues like the Borgata and Taj Mahal. Yet, if PokerStars acquires a gaming license in New Jersey, it’s quite likely that the once forgotten Resorts casino would gain inclusion onto the list.

Recently, the biggest and most recognizable name in online poker announced plans to build a $10 million poker room in the suddenly revived casino. Construction of the room is contingent on PokerStars being approved for a gaming license; something that might prove quite difficult.  Some believe that after the Black Friday fiasco, which saw the site fork over $731 million to the U.S Department of Treasury in 2012, that PokerStars would have difficulty reentering the market. However, because the company admitted no guilt in the matter, its prospects of seeking partnerships and licenses on US soil remained alive.

PokerStars recent announcement will likely provide more incentive for the NJ Division of Gaming Enforcement to approve its license application. Opening a new casino will create hundreds of jobs, at least 50 of them dedicated to getting the Internet systems up and running and at least 150 to operate its North American Headquarters.  In addition, a new poker site would provide NJ residents and tourists alike with extra motivation to visit Atlantic City.

Resorts hit an all-time low in 2012. Its poker room closed in early-2010, revenues were down, and Atlantic City as a whole was suffering. Then, in May Resorts opened a Margaritaville-style expansion. Costing $35 million, the new expansion helped Resorts recover from its recent woes. Revenues rose 6 percent in July and 12 percent in August as compared to last year. A PokerStars sponsored poker room would likely increase its profit margins further, possibility even detracting attention away from poker mainstays like the Borgata.

Internet poker is slated to launch in New Jersey on November 26th, a date that could be finalized as early as next week.  And while PokerStars is not included on the list of sites set to roll out, it would prove more effective than any other site at bridging the gap between live and online poker.

PokerStars partnered with Resorts several months ago, shortly after its ill-fated attempt to purchase the Atlantic City club fell through. The company is still locked in battle over an advance sum of $11 million that the Atlantic City Club is claiming as their own. In the meantime, PokerStars remains open to purchasing another casino.