Senator Ray Lesniak – who was instrumental in regulating online poker in New Jersey – indicated yesterday that PokerStars could return in a matter of weeks. 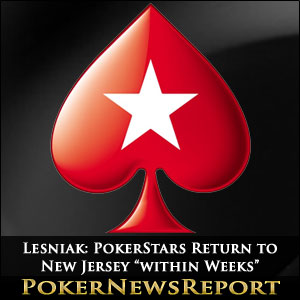 Senator Ray Lesniak – who was instrumental in regulating online poker in New Jersey – indicated yesterday that PokerStars could return in a matter of weeks.

Ever since the takeover of the Rational Group by Amaya Gaming and the resumption of talks about the licensing of PokerStars in New Jersey, speculation has been rife about when the online behemoth will once again open its virtual doors to the residents of the Garden State.

It was generally accepted that PokerStars´ license application would be rushed through by the New Jersey Division of Gaming Enforcement in order that the site could be up and running by the fall; and the online rumourmill started churning out specific dates for the return of PokerStars to New Jersey – the most popular being October 1st.

Now it would appear that the rumourmill was not that far wrong. Following a Tweet that @PokerStars launch will spark an AC revival. Stay tuned for a major announcement, New Jersey State Senator Ray Lesniak´s Twitter account was besieged by players and the press wanting to know more.

In response to a question about how long we should stay tuned, Senator Lesniak responded weeks, not months, and he went on to say that his long-term intention was for online poker sites in New Jersey to join up with player pools from other countries around the world to increase liquidity.

Hinting that it will be a huge day, bigger than anyone imagined, Senator Lesniak went on to Tweet that international poker tournaments like the Ryder Cup in golf will be coming to AC and that the opportunity for online poker players in New Jersey to compete against players in the rest of the world was on its way.

It would not be a big surprise for PokerStars to have something like this up its sleeve. Under the current legislation in the three states that have regulated online poker, PokerStars´ operations in the United States would be limited to New Jersey due to Nevada having enacted a “bad actor” clause in their online poker bill and 888Poker having a monopoly in Delaware.

Naturally, PokerStars have been keeping their cards close to their chest, but it is not inconceivable that PokerStars New Jersey could link up with the company´s ring-fenced operations in France, Italy or Spain to increase liquidity on the Garden State site – a move which would benefit players from Europe as much as it would help PokerStars gain an advantage in New Jersey.

A glut of software updates and new promotions and would imply that other New Jersey operators are trying hard to prevent a mass exodus from their sites to PokerStars when P-Day arrives. Party Poker in New Jersey has just released a big upgrade to its software – resolving issues that players have been complaining about for nine months – introduced cage deposits at the Borgata Casino and increased its New Player Poker Bonus to $1,000.

WSOP in New Jersey has introduced a promotion of nine knockout tournaments with guaranteed prize pools of $20,000 and a $400 reload bonus from September 19th through September 28th, while Ultimate Poker are offering new players from New Jersey only $25.00 free poker money before making a deposit and existing players a $500 reload bonus.

PokerStars Already Have the Upper Hand in New Jersey

Whatever the other online operators in New Jersey may be attempting, it is probably too little, too late. PokerStars recently organised two “Open House” meetings with former New Jersey VIPs which were both received positively – the feedback from which was posted on the 2+2 forum – and which reinforced the suggestion that PokerStars would be launching in New Jersey on October 1st.

Possibly the biggest issue that was addressed at the meetings was that of geolation. PokerStars appear to be investing heavily in technology to avoid as much as possible the disconnects that players on other sites have experienced, and this alone would give them the upper hand in New Jersey. Furthermore, PokerStars is likely to hit New Jersey with sign-up bonuses and promotions that no other online operator will be able to match.