In anticipation of its entry into the New Jersey market, PokerStars is inviting players in the state out to lunch to get feedback on any concerns. 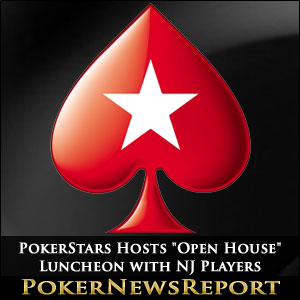 In anticipation of its entry into the New Jersey market, PokerStars is inviting players in the state out to lunch to get feedback on any concerns.

PokerStars’ application for online gaming licensure continues to be reviewed by regulators at the New Jersey Division of Gaming Enforcement. Approval is expected shortly and PokerStars found this a great opportunity to reach out to Garden State online poker players and learn of issues or problems that players are experiencing in the current market.

Presumably, the luncheon is a way for PokerStars to perhaps address the concerns of players prior to launching in the U.S. With customer service as one of PokerStars’ many strong points, meeting with players in advance of entering the market is an exemplary maneuver and can be viewed as yet another reason why the site is head and shoulders above the rest in terms of global player traffic.

The players invited are former VIPs in PokerStars’ player loyalty scheme who reside in New Jersey. The invitations were sent via email and included two available dates to attend.

The first get-together was held on Monday, Sept. 8 at the Hyatt Regency’s Vu Lounge in Jersey City. It was not exactly a lunch date, as PokerStars graciously picked up the tab for complimentary hors d’oeuvres and drinks from 5-7 p.m.

The second session is set for today and calls for complimentary lunch and drinks from 12:30pm-2:30 p.m. at the Landshark Bar & Grill on the boardwalk in Atlantic City. The Landshark is part of Resorts Hotel & Casino, with whom PokerStars previously had entered into an agreement to collaborate on offering online poker and gambling in New Jersey.

One can speculate that the partnership with Resorts remains intact although PokerStars is now headed by new ownership, Amaya, as a result of the blockbuster $4.9 billion transaction that was completed just weeks ago. Amaya now controls Rational Group holdings that includes Full Tilt Poker.

Many players are anxious for PokerStars to launch in New Jersey and to continue offering the same promotions and perks that the site has been known for since 2001. The New Jersey market can certainly use an infusion of new blood in terms of available online gaming options and who better than the world’s top poker site to provide that necessary boost?

Media reports have previously mentioned the possibility that PokerStars could be operating in New Jersey next month. That certainly would be a quick launch considering that state gaming regulators have not yet rubber-stamped their approval. Whenever the highly anticipated launch occurs, it will no doubt be heartily welcomed by online poker players.