The International Poker Open – once the biggest live poker event in Europe – is set to be given a makeover with the arrival of Full Tilt as the primary sponsor. 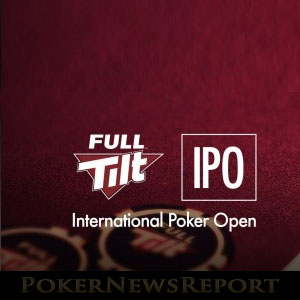 The International Poker Open – once the biggest live poker event in Europe – is set to be given a makeover with the arrival of Full Tilt as the primary sponsor.

Back in 2009, the International Poker Open smashed the record for a live poker event outside of the United States, when 1,347 players crammed into Dublin´s Regency Hotel to play for a first prize of $62,250.

The International Poker Open has maintained its popularity since then – 1,656 players competed in last year´s Dublin event – although its 2009 live poker record seems ridiculously small in light of the massive poker tournaments that have been subsequently hosted in Brazil and China.

Now the IPO is being given a makeover with the arrival of Full Tilt Poker as the tour´s primary sponsor; and although it may never regain its record for being the biggest live poker event outside the United States (you can´t fit that many people into the Regency´s bar), an online qualifying schedule should boost the numbers playing in this year´s seven-stop tour.

This year´s International Poker Open Tour gets underway on May 22nd at the Star Casino in Bray – about a 30 minute drive south of Dublin. It features a $250.00 buy-in Main Event and a series of side events and cash games to keep players occupied if they bust out early from the feature tournaments.

Players who intend to compete in the Main Event may want to take advantage of a $25.00 buy-in online satellite that is being hosted at Full Tilt this coming Sunday (at 13:00ET). There is no guarantee on the number of seats available, but it may be a softer opportunity than trying to qualifier the weekend before the IPO Bray gets underway.

The remainder of the schedule for the 2015 International Poker Open Tour looks like this:

Please note that – with the exception of IPO Bray and IPO Dublin – the dates are subject to change. Full Tilt has also said that extra dates may be added to the tour depending on the response it receives to the events in Bray and Cork.

Dublin IPO Sure to be Huge

The feature event on this year´s tour is undoubtedly the IPO Dublin Main Event and Full Tilt Poker will be trying to satellite as many players as possible into the headline tournament. The provisional schedule for the tournament has four opening flights (all the other Main Events have just two Day 1s), which are preceded by live super-satellites and supported by an extensive side event schedule. The Dublin IPO Main Event also coincides with the APAT Dublin Main Event.

We´re very happy to put the Full Tilt stamp on an already-successful tournament series. With affordable buy-ins and satellites, but big prize pools, we´re giving players of all levels a great live poker experience, whatever their bankroll.