Murilo Ruiz won the PokerStars-sponsored Brazilian Series of Poker “Millions” Grand Final – the biggest poker tournament ever to be staged outside of America. 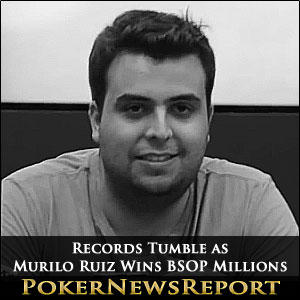 Murilo Ruiz won the PokerStars-sponsored Brazilian Series of Poker “Millions” Grand Final – the biggest poker tournament ever to be staged outside of America.

Last week, 2,400 hopefuls turned up at the Holiday Inn Parque Anhembi in Sao Paulo to compete in the R$2,200 buy-in PokerStars-sponsored Brazilian Series of Poker “Millions” Grand Final. 888 players survived the three opening flights to return for Day 2 – during which the 243-player money bubble burst when Marcio Sid (A♥ 5♥) was out-kicked by Felipe Sedge (A♠ J♥) on a paired board.

Following the usual post-bubble “double or bust” series of eliminations, 153 players returned for Day 3 of the BSOP Millions Grand Final – headed by Jairo Cesar de Paula Junior (1,457,000 chips), who was one of only three players to breach the million chip barrier. After seven levels of play on Day 3, “Jairo” only just scraped into the final 45 who were to compete on Day 4 for a seat at the final table; but he recovered well to be in third place when the final table was set.

Murilo Ruiz had taken the chip lead on Day 4 when he won a huge pot against Joselito Ricardo A♥ A♠ > K♣ K♥ – which caused Ricardo´s departure from the BSOP Millions Grand Final – but, within ten minutes of the final table starting, Ruiz had his Aces cracked by the Kings of Tiego Zaramella who doubled-up to be at the top of the chip counts himself.

Five minutes later Leonardo Alencar was the first player to leave the final table – calling Pedro Padilla´s shove to set up an A♥ 8♣ (Alencar) -v- A♠ 8♠ (Padilla) confrontation. The flop of 7♦ 4♥ 2♠ indicated that it would be a chopped pot, but the 10♠ on the Turn and K♠ on the River gave Padilla the nut flush, and Alcenar was sent to the rail in ninth place.

However, Padilla was soon to be the victim of another bad beat – getting all-in with K♣ K♠ against the pocket Tens of Erasmo Correa and seeing the 10♦ give Correa a set. Padilla busted in eighth, as Jorge Breda took over at the top of the chips counts – his A♠ A♣ holding against the K♣ K♥ of Murilo Ruiz and signalling the end of the bad beats.

On page 519 of Doyle Brunson´s “Super System”, it states “never play this hand” (Ace-Queen), and three players at the final table of the BSOP Millions Main Event found out why:

With the dual knock-outs of “Jairo” and Erasmus, Murilo Ruiz had moved into a significant chip advantage and, as the game went four-handed, the remaining players negotiated a deal that would see them lock up a guaranteed prize based loosely on their respective chip counts, with R$220,100 left over for the winner.

Once the deal had been agreed, the tournament was over within an hour. Murilo Rodrigues shoved all-in pre-flop with the ambitious Q♥ 8♥, and fell in fourth place to the dominating A♣ K♦ of Jorge Breda. Breda was to depart in third when his A♣ 10♦ failed to connect with the board against Murilo Ruiz´ J♥ J♠, and Ruiz took a 41 million -v- 19 million chip advantage into the heads-up against Marcello Azevedo.

The concluding hand of the BSOP Millions Main Event occurred within ten minutes of heads-up play and included an Ace-Queen combo.

With blinds of 200K/400K (ante – 50K), Azevado was the pre-flop aggressor; raising to 1 million chips from the Small Blind, and then shoving all-in when Ruiz responded by betting 2.5 million chips. Ruiz made the call, and the cards were on their backs: