The Asia Pacific Poker Tour Beijing Millions set a new record for the number of entries in a live poker tournament to be held outside the United States. 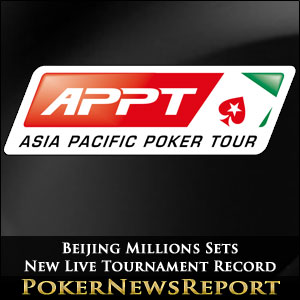 The Asia Pacific Poker Tour Beijing Millions set a new record for the number of entries in a live poker tournament to be held outside the United States.

Last August the GukPT Goliath set a new record for the largest live poker tournament outside the US when 2,568 entries were received over the four opening days of the event. PokerStars narrowly failed to beat that number in December when the BSOP Brazilian Millions attracted 2,446 entries; but now the world´s largest online poker company can also hold claim to hosting the largest live poker event outside the US.

The Beijing Millions was the first time that the Asia Pacific Poker Tour had hosted a live poker event on mainland China, and the response was phenomenal – 2,732 entries being received over six opening flights to create a prize pool of ¥7,376,400 (approx $1,194,600). 202 players finished in the money – including PokerStars´ Team Pros Celina Lin (24th), Bryan Huang (50th), and Vivian Im (151st) – and an all-Chinese field contested the final table.

When the final table was reduced to just four players, a deal was struck based on the relative chip stacks at the time. Thereafter Chen Qin went on a roll and bust out two of his opponents to take a 17 million -v- 9 million chip advantage into the heads-up against Yang Zhang. Qin (Five-Four offsuit) sealed victory against Zhang (Seven-Three offsuit) when turning a Full House against Zhang´s two pairs to collect the Beijing Millions trophy and revised first prize of ¥675,000 (approx $109,300).

Speaking after the conclusion of the Beijing Millions, APPT President Danny McDonagh admitted that the turnout for the event had exceeded his wildest expectations. McDonagh said that he had always believed that the event would be successful, but the phenomenal support for the Beijing Millions had made it a historic week for poker in China and it had been a great honour to be part of the tournament.

His views were mirrored by Jian Yang – the principle of Beijing´s AoBoTe Sports Culture-Transmitting Company who had co-hosted the event at the Beijing Poker Club. “I am so happy to run such a successful event in Beijing” Yang said, “together we (AoBoTe and the APPT) created a miracle with the Beijing Millions”.

How Long Will the New Record Stand?

With only ten days before the 2014 GukPT Goliath gets underway, Grosvenor Casinos will be looking to quickly reclaim their record. The company has scheduled six opening flights for this year´s £120.00 buy-in tournament, with hundreds of online qualifiers running prior to the beginning of the event – at least 150 seats are up for grabs in an aggressive series of £8.80 satellites starting today.