Amaya Teams Up With Caesars in New Jersey

The regulated US online poker and gambling market in New Jersey has seen a hotbed of activity lately with new partnerships being formed seemingly almost daily. 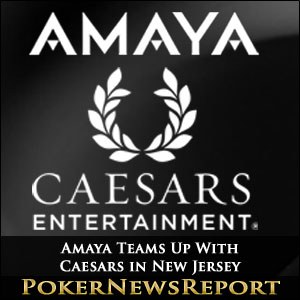 The regulated US online poker and gambling market in New Jersey has seen a hotbed of activity lately with new partnerships being formed seemingly almost daily.

The latest pairing finds the Amaya Gaming Group joining forces with a Caesars Interactive Entertainment subsidiary to provide a gaming platform at CaesarsCasino.com. The deal is contingent upon Amaya receiving regulatory and licensing approval from New Jersey gaming officials.

Amaya Gaming Ceo David Baazov said in a press release that the new agreement with Caesars is an “immense win” that will allow the company to establish a presence in the newly-regulated U.S. market. Although the deal with Caesars is restricted to New Jersey’s Internet gambling regime, Amaya is also in line to make a splash in Nevada’s online poker scheme.

Earlier this year, Amaya teamed with Bally Technologies in an agreement to jointly operate an online poker site in the Silver State. Bally was the first company to receive an online gaming license in Nevada, but has not taken advantage of that head start in going live with an Internet poker offering.

In both New Jersey and Nevada, Caesars is already aligned with 888 Holdings and just last week launched WSOP.com in Nevada, the second legalized online poker site in the nation. Caesars operates four of the 12 casinos in New Jersey and Amaya is now poised to grab a piece of that action with the latest partnership agreement.

Just two days ago, 888 announced a partnership with Wynn Interactive to operate Wynn-branded sites via 888’s All American Poker Network. The latest industry scuttlebutt indicates that WSOP.com or any Caesars sites will not be pooling players with any Wynn sites in Nevada or New Jersey.

The result shows that companies who have spread themselves out with numerous partnership agreements will actually be competing against themselves. On its face, that appears not to make good business sense. But on the other hand, it can be viewed as a way to grab a large share of the available online gambling market.