Wynn Resorts has inked a partnership agreement with 888 Holdings to launch online poker and gambling offerings in Nevada and New Jersey. 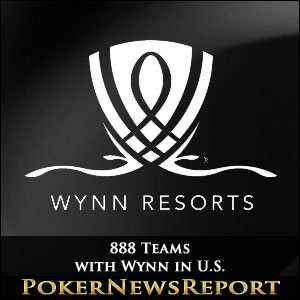 Wynn Resorts has inked a partnership agreement with 888 Holdings to launch online poker and gambling offerings in Nevada and New Jersey.

The deal calls for Wynn-branded sites to go live through 888’s All American Poker Network (AAPN), the business-to-consumer arm established six months ago by 888 in conjunction with Avenue Capital Group. APPN’s executive chairman, David Licht, called it an honor to be chosen as the online gambling partner of Wynn Interactive.

Citing the name recognition and quality associated with the Wynn marquee brand, Licht added that 888 continues to establish itself in the newly-regulated U.S. market. The announcement of the deal with Wynn comes just days after 888 made its debut in the legalized online poker market in Nevada with the launch of WSOP.com under its partnership with Caesars Interactive Entertainment.

Also in the Silver State, 888 is aligned with Treasure Island and is set to soon roll out a poker site via that online gambling license. The launch will be under the 888Poker brand and looks to be the third online poker site offered to Nevada residents and tourists, eGR reported.

888 is positioning itself to be a huge player in U.S. online gaming. In addition to partnerships in both New Jersey and Nevada, 888 is also part of the primary vendor consortium in Delaware that will lead the First State’s Internet gambling platform. In tandem with Scientific Games and Williams Interactive, 888 has considerable clout regarding Delaware’s online gaming offerings that are expected to launch perhaps as early as next month.

There is more good news concerning 888 in regard to the worldwide online poker scene. Recent player traffic numbers as provided by an independent tracking company show that 888 has inched forward to third place in the global market. Now trailing only PokerStars and the iPoker Network, 888Poker has passed Full Tilt Poker in the rankings.

As an interesting aside, Wynn Interactive had previously partnered with PokerStars more than two years ago. But that teaming never came to fruition after the U.S. DoJ launched its wrath on the U.S. market with the Black Friday site seizures and indictments. But Wynn and 888’s pairing will come to fruition now that regulated online poker and gambling is spreading throughout the nation.