WSOP.com Rolls Out in Nevada

The second state regulated online poker site in the US is all systems go, WSOP.com for real money is up and running. 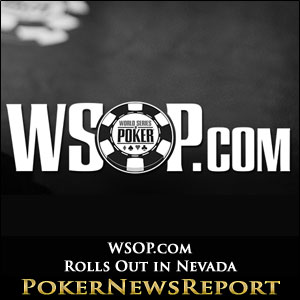 The second state regulated online poker site in the US is all systems go, WSOP.com for real money is up and running.

After several months of heavy promotion, including a viral marketing campaign that just happened to coincide with this year’s WSOP, the United States second regulated poker site is now live – well, at least to players currently residing in Nevada. And while the first site, Ultimate Poker has suffered its share of drawbacks, representatives of WSOP are confident that name recognition will rule the day.

It had better, because WSOP.com isn’t worth getting too excited about.

Having already established a sister site in the UK, WSOP.com, a product of 888Poker software, is merely a slightly modified and in some ways dumbed-down version of its overseas counterpart, tailored towards players from Nevada. It allows both Mac and PC users to download a client – one of the software’s few redeeming qualities.

To the dismay of many, the Nevada-friendly version of the software doesn’t save hand histories. And forget about HUD’s – they’re not allowed. One would think that a site branding the WSOP name would at least provide more than just basic features, many of which could be found on poker sties dating back to 2003.

Caesars claims that they hope to attract more players by offering more games, but to date WSOP.com only offers FL and NL variants of Hold’em, PLO, FL O8 and 7-Stud – not exactly a wide array by any means. Cash games, Sit & Go tournaments and MTTs are offered, but no one particular offering stands out as unique. Whether or not that will change in the near future is yet to be seen.

The launch itself met with some issues. Sprint phone users were not being recognized by the site’s location verification services. Furthermore, some Visa customers had trouble making a deposit. Ultimate Poker had similar issues at launch. Hopefully, most of these issues get sorted out by the weekend, when most tournament grinders play.

Deposit options are rather limited, as only checking account or credit card registrations are available at this time.

Really, the only thing worth getting excited about is the upcoming WSOP.com Online Championship series. The site will play host to a series of nine bigger buy-in events with $500,000 in cash added to the prize pool. Each winner will be automatically entered into an invite only “Online Nine” tournament that will mirror the WSOP Main Event final table. Gimmicky, sure – but it could drive much needed traffic to the site.

As it stands, WSOP.com did little to distinguish itself from Ultimate Poker. But at least online poker players in Nevada now have two mediocre options.