Yesterday Vinny Pahuja extended his lead at the top of the FTP Montreal Poker Festival Main Event and goes into the final table favourite to win the tournament. 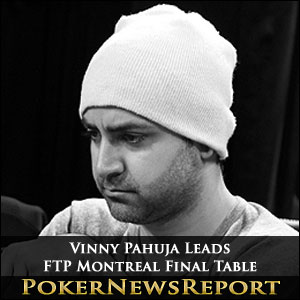 Yesterday Vinny Pahuja extended his lead at the top of the FTP Montreal Poker Festival Main Event and goes into the final table favourite to win the tournament.

After Vinny Pahuja´s sensational Day 3 (in which he hit Quad Kings > A♠ A♥ > Q♠ Q♦), observers at the Full Tilt Poker Montreal Poker Festival Main Event might have been forgiven for thinking that Pahuja had used up all of his good fortune; but yesterday at the Playground Poker Club, not only did he maintain his chip advantage, he extended it.

Pahuja (4,450,000 chips) entered the penultimate day of the FTP Montreal with an 800,000 chip advantage over Eric Despres (3,625,000 chips) and Eric Larose (3,615,000 chips), but after a crazy first two levels – in which ten of the twenty-five players were eliminated – Pahuja had moved further into the lead courtesy of a A♦ Q♦ > A♠ 9♣ hand which saw the departure of Jonathan Bussiere in nineteenth position.

As the field was reduced to two tables, Vinny Pahuja used his large stack to good effect without (for a change) getting involved in any notable hands. Meanwhile players around him continued to bust from the FTP Montreal Main Event. Eric Larose ran his top pair into the top two pair of Guillaume Rivet, while Russell Crane and Maxime Laberge both tried to bluff Eric Despres out of valuable pots – and both paid the ultimate price!

The “unofficial” final table of ten was set when Bill Kontaratos bust Jeff Cote (Q♦ Q♠ > A♥ 8♥) and Terrance Eishens (8♣ 8♥ > K♠ 2♠) in consecutive hands, and two hands later the final nine was decided when Jeremie Trepanier moved all-in with A♣ Q♠ and received a call from Eric Despres (A♥ K♥) and both players missed the community cards to eliminate Trepanier in tenth.

When play resumes this afternoon at the Playground Poker Club in Montreal at 1.00pm EDT, there will be twenty-six minutes remaining in Level 29 (blinds 40,000/80,000 – ante 10,000). Play will continue until just one player remains – who will walk away with the Full Tilt Poker Montreal Main Event trophy and C$260,581.