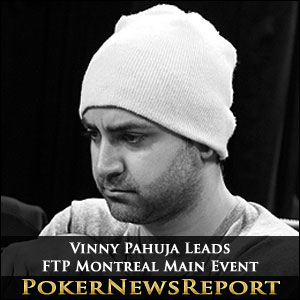 Vinny Pahuja is the personification of a tournament grinder. He has never known the feeling of winning a WSOP bracelet or WPT title. To date, he only has two six-figure cashes to his credit. But make no mistake; Pahuja has been quietly tearing up the east coast tournament scene for over five years.

And now, Vinny is poised to take down the Full Tilt Poker Montreal Main Event and in the process win the elite recognition he so rightfully deserves.

The New York based pro will begin Day 4 atop the leaderboard with 4,450,000 in chips. His nearest competitor, Eric Despres will start with over 800,000 less.

Day 3 began with 84 players. The plan was to stop play when only 27 remained, but Pahuja it by registering a double knockout on the final hand of play.

Here’s how it went down: Pahuja, holding A♦K♥ five-bet jammed after Asadul Shah four-bet  jammed with Q♠Q♦ and Stacy Ievec three-bet with A♠A♥. Ievec snap called Pahuj’s all-in, and they were off to the races. Only problem was that Pahuja’s vehicle was missing a tire. A K♦ on the flop provided him with a spark of hope, the K♠ on the turn nearly sealed the bad beat, and the K♣ on the river added insult to injury. When the smoke from this memorable hand cleared, Pahuja would be the beneficiary of a more than 4 million chip pot. As an added bonus, he gets to tell his friends and family about rivering quads.

Suffice to say, Puhuja was in shock, stating That never happens to me.

At another table, recognized pro Victor Ramdin would bust when his Aces were cracked by K-J. Another player, holding 9-9, was also involved in the hand. Ramdin would end up finishing in last place, as 9-9 made a set and K-J a straight. Clearly, it wasn’t a good day for Pocket Rockets.

Other notable Day 3 eliminations included Gavin Smith, Yann Dion and Dermot Blain. The remaining 25 players will return for action at noon, and sans a slower than expected pace, will play until a winner is declared.