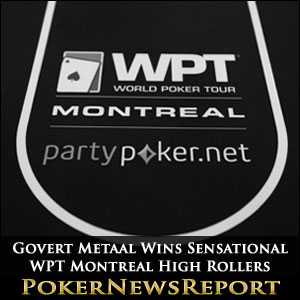 While Derrick Rosenbarger was taking down the PartyPoker WPT Montreal Main Event, fifty-six players put their hands deep into their pockets to compete $10,400 buy-in High Rollers event. After two days of action, just nine players remained; but, with only six due to cash in the event, the early encounters at the final table on Day 3 were tense.

The two shortest stacks going into the conclusion of the tournament – Michael Watson and Mark Radoja – were the first to leave the table when their attempted double-ups failed; but Connor Drinan can consider himself unlucky to be the High Roller “Bubble Boy” – getting all-in with K♠ K♦, receiving a call from Martin Jacobsen (A♣ Q♦) and seeing Jacobsen hit runner-runner trip Queens on the Turn and River.

Incredible Double-Up Gets Metaal into Contention

Govert Metaal had gone into the final table in fifth place of the nine remaining players, and had been reduced to just twelve big blinds during the early stages. Staying relatively inactive while Pratyush Buddiga and Gregory Marcus were eliminated from the WPT Montreal High Rollers in fifth and sixth places respectively, Metaal then burst into contention with an incredible double-up against Matt Marafioti.

Metaal had got all his chips in pre-flop with Q♠ Q♦ and got a call from Marafioti, who had been dealt K♣ K♠. Metaal was elated to see the window card on the flop – the Q♣ – but his joy lasted just seconds as the Queen was followed by the 3♦ and K♦ – giving both players sets. The 6♠ on the Turn was no help to Metaal, but he hit his one-outer Q♥ on the River to stay alive in the tournament and cripple Marafioti in the process.

Matt Marafioti soon lost the remainder of his chips to Martin Jacobsen, and the heads-up was set between Jacobsen and Govert Metaal when the Dutchman bust Tim Reilly out in third place J♠ J♥ > 7♥ 7♦. Metaal had a substantial chip advantage going into the climax of the WPT Montreal High Rollers Event, and he used it the wrap up the tournament in just five hands.

In the final hand of the event, Jacobsen moved all-in from the Small Blind with Q♥ Q♦ and Govert Metaal made the call with A♠ 9♥. The flop of A♦ 9♦ 6♦ gave Metaal two pairs, but meant that he had to fade a Queen or another diamond to win the tournament. The 4♥ on the Turn and 5♠ on the River duly obliged, to give Govert Metaal victory in the WPT Montreal High Rollers Event.